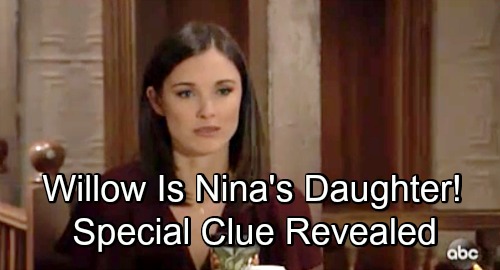 General Hospital spoilers tease that General Hospital writers may have snuck a little hint about who Nina Reeves (Michelle Stafford) real daughter might be. In Tuesday’s episode, November 6, Willow Tait (Katelyn MacMullen) had on a necklace with a tiny horseshoe. This could be a coincidence but it could also be intentional on the part of GH writers.

It could also be a red herring like they wrote with Sasha Gilmore’s (Sofia Mattson) purse having horses on it. General Hospital viewers now know for a fact Sasha is not Nina’s daughter, although all DNA evidence available shows she’s probably a close relative.

Other General Hospital spoilers have teased that Sasha could either be a sister or daughter of Britt Westbourne, (Kelly Thibaud) or possibly a much younger aunt, a baby sister of Liesl Obrecht (Kathleen Gati) and Madeline Reeves (Donna Mills).

This necklace in question is not exactly what General Hospital fans are looking for as proof of Nina’s true daughter, but that doesn’t mean Willow may not have the other half of the half-heart necklace. She just hasn’t been shown wearing it yet, and may not right away. Willow may even be using the chain from it for several different pendant pieces she might switch off between. Lots of women do that. The chain is gold, so at least it’s the right color.

Willow has not been revealed to have family in town, so she could certainly be a candidate for Nina’s true daughter. She’s about the right age and looks enough like she could be a product of Nina and Silas Clay (Michael Easton) to pass for Nina’s daughter.

Willow’s a little shorter than Nina and Silas, but then Madeline Reeves wasn’t as tall as Nina or Silas either. Willow could have gotten her height genes from Madeline. Time will tell if Willow is revealed as Nina’s daughter. Katelyn MacMullen was just put on contract at GH and her name appears in the show’s opening credits – this means Willow is her for a major story and a long run.

General Hospital buzz is that the reveal may come about quite innocently when Nina is on an outing with Charlotte (Scarlett Fernandez) who is in Willow’s class – Nina happens to be wearing the half heart necklace and Willow recognizes it and says in small talk that she has one just like it only the other half of the heart! Keep watching General Hospital on ABC and checking CDL GH spoilers, updates and news to see what the reveal of Nina’s true daughter brings!