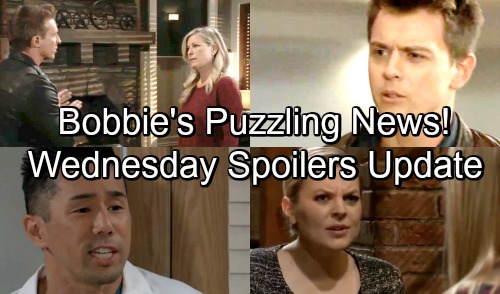 General Hospital (GH) spoilers update for Wednesday, November 7, tease that Brad (Parry Shen) will have a much-needed outburst. He’s been keeping a lot of fear and frustration bottled up inside, so he’ll finally have a chance to unleash it. Brad can trust Britt (Kelly Thiebaud) to keep the baby switch secret. He just confessed that “Wiley” isn’t his son, so he’ll offer some details and help Britt understand soon enough.

Britt might remind Brad of how many secrets he’s kept in the past. She may think he’ll be fine as long as he doesn’t panic, but it’s a little late for that. Brad will feel like his life’s on the verge of destruction, so Britt will have her work cut out for her. She’ll attempt to calm Brad down and keep him focused on his goal.

Over with Bobbie (Jacklyn Zeman), she’ll be flustered over an incident at Brad and Lucas’ (Ryan Carnes) apartment. When Michael (Chad Duell) gets updates, he’ll wonder what the trouble is. This probably won’t lead to any big shocker, but it could provide a hint or two. Any info Michael picks up along the way will be useful later.

Meanwhile, Maxie (Kirsten Storms) will reject Nina’s (Michelle Stafford) pity. Nina will hate that Maxie spent her birthday alone, but GH fans know she didn’t. Peter (Wes Ramsey) made sure Maxie wasn’t lonely, so she’ll fill Nina in on Wednesday. As Maxie gushes about what a great time she had, Nina will realize her feelings are growing. She may warn Maxie to be careful with her tender heart.

Across town, Ryan (Jon Lindstrom) will face another round of drama. Laura (Genie Francis) will find “Kevin” at GH and bring up something important. “Kevin” assured Laura there was no one else, but she spotted him bonding with Ava (Maura West) later. Will Laura mention their frequent visits and ask if Ava’s more than a patient?

“Kevin” won’t care what Laura believes as long as she butts out! He just wants an opportunity to create murderous mayhem in peace. Carly (Laura Wright) will also catch up with Laura on Wednesday. There’ll be plenty to talk about thanks to the election hacking, the Mary Pat (Patricia Bethune) case and the lingering Ferncliff mystery.

Speaking of that mystery, Carly recently vowed to solve it. Jason (Steve Burton) insisted he’d take the lead for her, but he’ll suddenly face resistance from Carly. She may get rattled about stirring things up again, but General Hospital spoilers say Jason will push for answers. He’ll feel like this is the only way Carly can put her nightmare behind her.

With Carly’s approval, Jason’s mission will likely press on. Will he uncover any clues about the real Kevin? Will Jason come through for Dr. Collins down the road or will someone else save the day? We’ll keep you posted as other General Hospital news comes in. Stay tuned to ABC’s GH and don’t forget to check CDL often for the latest General Hospital spoilers, updates and news.