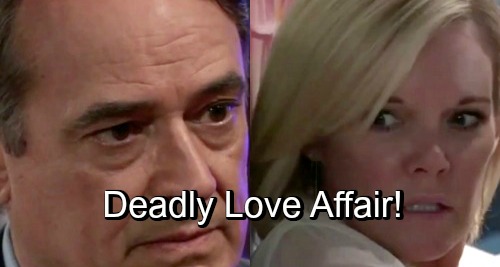 General Hospital (GH) spoilers tease that Ava (Maura West) will get some stunning news. GH fans know Ryan (Jon Lindstrom) has set his sights on Ava and her dark side. He believes she’s unlike any other woman in Port Charles and he’s certainly right. There’s only one Ava Jerome and many PC residents are grateful for that! One Ava is more than enough.

Of course, plenty of General Hospital viewers love Ava and in all her sneaky glory. It’s just too bad her moves always come back to bite her. Ava’s latest mistake is letting herself get caught in Ryan’s web. That trend will continue in the weeks ahead. Ava appreciates the fact that “Kevin” doesn’t judge her or try to change her. He simply argues that Ava’s inner demons are worth analyzing and exploring.

“Kevin” is always quick to join Ava whenever he sees her around town. It appears he’ll even pay her a visit at the gallery soon. On Monday’s GH episode, Ava will freak over a possible intruder. She’ll probably see that it’s “Kevin” and stand down. Regardless, Dr. Collins’ impersonator will have some updates soon. He’ll admit he told Laura (Genie Francis) he wanted to separate.

Naturally, the wheels will start turning for Ava. She’ll be genuinely shocked by this sudden development. Ava’s mind won’t immediately start imagining a future with “Kevin,” but she’ll have to wonder what his move means. She might ask herself if she’s the reason for “Kevin’s” split.

Ryan’s separation is really about a much larger picture. He doesn’t need Laura breathing down his neck every second of the day or following him all over PC. Staying with Laura is too risky, so he’s putting her behind him. Kevin would much rather devote his time to plotting mayhem anyway.

However, Ava is part of that equation. General Hospital spoilers say Ryan will become increasingly obsessed with the gallery owner. He’s seemingly trading his Felicia (Kristina Wagner) infatuation for one with Ava.

Ryan knows how to turn on the charm and make Ava feel like a dark queen. Since she’s feeling lonely anyway, a romance for these two would be a no-brainer. It’d rev up the shock and outrage when the truth inevitably comes out. That’s especially true since Kiki (Hayley Erin) will likely become one of Ryan’s deadly targets.

Will Ryan make the first move? Could Ava initiate something instead? Either way, Port Charles will have something to talk about if “Kevin” and Ava become a hot new item! We’ll keep you posted as other GH details emerge. Stick with the ABC soap and don’t forget to check CDL often for the latest General Hospital spoilers, updates and news.