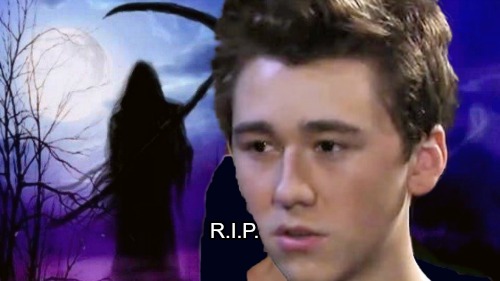 General Hospital (GH) spoilers reveal that ABC soap fans are growing concerned about one character’s fate. All of a sudden, wham! Oscar (Garren Stitt) has a brain tumor. Of course, GH claims this has been the case all along. Kim (Tamara Braun) argued that she’s been secretly seeking help for Oscar without his knowledge.

However, it’s clear this is a General Hospital rewrite or a ‘retcon’ as it’s known in the business. They never gave us any real signs that Oscar was sick, which means TPTB at GH must have a specific goal in mind. Are they going in this direction because they want rid of Oscar? It’s possible they intend to phase out this teen and eventually his mother.

Some GH viewers enjoy Kim, but others could take her or leave her. The response to this character has been rather lukewarm. Margaux (Elizabeth Hendrickson) was brought in, so General Hospital obviously didn’t have a lot of faith in Drew (Billy Miller) and Kim as a couple.

With the introduction of an aged Cameron (William Lipton), he seems poised to be Josslyn’s (Eden McCoy) next love interest. Where does Oscar fit in that picture? General Hospital could certainly have Oscar find out about his condition and push Josslyn away. That’d set up a love triangle if Oscar gets cured, but those can only go on for so long.

Sooner or later, one of the guys may have to go. Unless GH wants to bring in another girl, there just won’t be enough love interests to go around. That could be a sign that Oscar’s going to bite the dust. Josslyn could get some great drama in the aftermath. She could cling to Cam as she struggles to move on.

As for Kim, it’s easy to imagine her grieving with Drew before bailing on Port Charles. Kim might need time to find herself and learn who she is apart from being a mom. Losing Oscar would absolutely break her, so General Hospital could get some crushing scenes out of that, too.

Soaps have to bring shockers and heartbreak, but sometimes that means characters have to be killed off. Will Oscar be GH’s next victim? Will his inoperable brain tumor force him into an early grave? Based on the story they’re telling, it’s important to brace for trouble just in case.