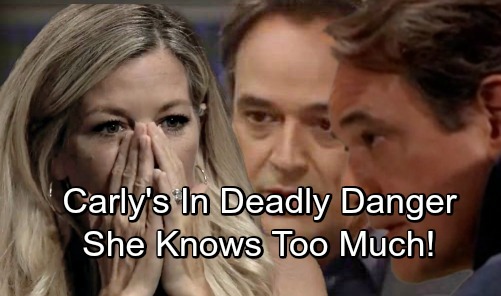 General Hospital (GH) spoilers tease that Ryan (Jon Lindstrom) will have a blast causing chaos in Port Charles. He recently swapped places with Kevin (Jon Lindstrom), so his big adventure’s just kicking off. Ryan will start by getting himself acclimated. He’ll want to become familiar with Kevin’s patients as well as any new details of Kevin’s personal life.

Ryan’s impersonated Kevin before, so he shouldn’t have too much trouble – at least with the people he keeps at a distance. However, Kevin’s inner circle could battle some suspicions. When Laura (Genie Francis) returns to town, she’ll definitely raise an eyebrow at “Kevin’s” sudden personality shift. She’ll undoubtedly fear that their time apart has taken a toll.

Of course, Laura will do her best to repair the damage. She’ll probably become clingy and make Ryan’s scheme difficult. The harder Laura tries to pull Kevin closer, the more Ryan will push her away. It’s easy to imagine Laura revving up the romance and getting shut down. Ryan may not be interested in Laura’s seduction efforts. He’d rather spend his days plotting to destroy the people of PC.

Meanwhile, Kevin will fret about the switch. He’ll be furious with himself for letting his brother gain the upper hand, but what’s done is done. Kevin will try every trick in the book to get out of Ferncliff, but he’ll be totally stuck. Ryan’s seemingly covered all his bases. He warned the orderly that the patient was dangerous and would say anything to get out of there.

That means Kevin probably has no chance of escaping on his own. He’ll need somebody to put the puzzle together and come to his rescue. Kevin could be in grave danger if someone learns the truth or gets too close to it.

If Ryan realizes his plan’s falling apart, he might decide to kill Kevin. It’s doubtful Kevin would actually bite the dust, but GH could make fans think it’s going to happen. General Hospital spoilers state that Laura will be in a race against time this fall. She’ll need to figure out the truth about Ryan and somehow save her trapped hubby.

Could Carly (Laura Wright) and Laura team up for this mission? General Hospital spoilers say Carly will play a huge part in the shockers to come. She’ll face major repercussions from her stint in Ferncliff. It sounds like since she knows too much, she’ll pose a threat to Ryan. Carly could be the one to expose everything! She might give Laura a crucial clue or even figure out the swap and spill the whole story.

Bottom line, Carly’s going to be a key player in all this. You can bet Jason (Steve Burton) will be dragged into this mess, too. When Carly’s in a jam, Jason’s never far behind. We’ll give you updates as other GH news comes in. Stay tuned to the ABC soap and don’t forget to check CDL often for the latest General Hospital spoilers, updates and news.