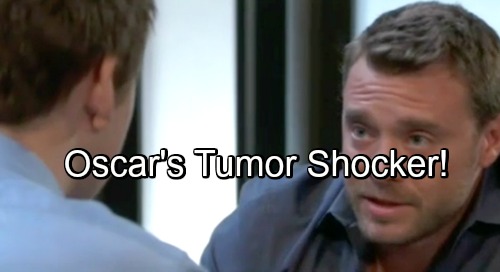 General Hospital (GH) spoilers tease that Drew (Billy Miller) will get a shock this week. His bombshell will involve Oscar (Garren Stitt), so there are a few options to consider. The first one involves Oscar’s legal efforts. He reached out to Alexis (Nancy Lee Grahn), so he’s hoping she can help him avoid the clinical trial. Oscar will do whatever it takes to have a say in what happens next.

If Alexis decides not to help Oscar, he can always turn to Scott (Kin Shriner). Regardless, Oscar could drop his legal bomb on Drew and leave him reeling. Drew may see just how far his son’s willing to go. Both Kim (Tamara Braun) and Drew desperately want Oscar to give this treatment a chance. There’s a possibility that it’ll kill Oscar sooner, but the benefits outweigh the risks here.

Nevertheless, Oscar will inevitably stand his ground for now. If that’s his shocker, he’ll make his position crystal clear to Drew. Of course, we can’t rule out some other blows. Oscar could tell Drew that they should just end their relationship. They’ve been trying to bond ever since they found out about each other, but Oscar may not see the point anymore.

That would certainly leave Drew stunned and frantic to fix this. He doesn’t want to miss out on what could be his final months with his kid. The third option might be the most tragic. General Hospital could deliver another seizure. Oscar’s last one was alarming for his loved ones, but there’s even more at stake now. Drew’s in the loop on Oscar’s condition, so that’d bring true terror.

During the week of October 29-November 1, General Hospital spoilers say Drew will pay his son a visit. That seems like an unusual way to phrase it. We haven’t seen Kim’s home set in a while, so Drew may not be popping in there. It’d be weird to call it “paying a visit” if Drew met up with Oscar in the park.

Could Oscar be at GH when this visit takes place? We all know Oscar’s bound to have another episode at some point. Whether it happens now or later, it’ll highlight just how dire the situation is.

Would that change Oscar’s mind about the clinical trial or make him more convinced than ever to just live his life? Oscar will most likely relent eventually, but let’s hope it’s not too late for him by then. We’ll give you updates as other GH news comes in. Stay tuned to the ABC soap and don’t forget to check CDL often for the latest General Hospital spoilers, updates and news.