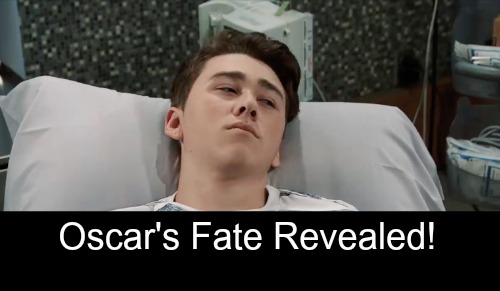 General Hospital (GH) spoilers tease that Oscar (Garren Stitt) will be in a fight for his life. Kim (Tamara Braun) recently consulted with Terry (Cassandra James) and now GH fans know why. It turns out Oscar’s blood work was the topic of their discussion.

During a chat with Liz (Rebecca Herbst), Terry admitted she was trying to help a difficult patient. She suggested that she was worried, but pointed out that medicine is the business of hope. Unfortunately, Kim won’t have much of that in the coming weeks. She’s seemingly been living in denial about Oscar’s health woes.

Oscar battled a medical issue in his past, but this is his first seizure in a long time. Kim tried to shut the problem out, but she can’t do that anymore. She has to tackle it head-on with a little help from Drew (Billy Miller).

General Hospital spoilers say Kim will come clean to Oscar’s father on Wednesday, September 5. She’ll explain the illness Oscar’s facing, so Drew will fear the worst. It appears Oscar’s rapidly deteriorating, so Kim will need to lean on Drew for support. She’ll hate the thought of losing her beloved son.

Likewise, Drew will desperately want more time with Oscar. He only recently found out he was Oscar’s dad, so they deserve a chance to truly know each other. Despite his concerns, Drew will undoubtedly stay strong for Kim. He may argue that Oscar’s a fighter and will somehow pull through.

Since Oscar’s condition is revving up out of nowhere, Kim won’t be so sure. She’ll believe Oscar could suffer a grim fate. General Hospital writers have a couple of interesting routes they could take. It’s possible they’ll let Terry save the day and come up with some miraculous breakthrough. Oscar could be cured at the end of this storyline.

However, it’s also possible GH wants to write Oscar out. If they’re planning on putting Josslyn (Eden McCoy) and Cameron (William Lipton) together, General Hospital may eliminate the competition entirely. They may want the drama of Oscar’s death to push Joss and Cam toward each other. Drew and Kim could reunite in grief as well.

Regardless, Oscar’s decline will bring some tough moments this fall. Since Terry’s a pediatric oncologist, Oscar appears to have a tumor of some sort. He complained about a headache, so a brain tumor seems likely. Will Oscar die an agonizing death or somehow beat the odds?

General Hospital fans won’t want to miss the twists and turns ahead. We’ll give you updates as other GH news comes in. Stick with the ABC soap and don’t forget to check CDL often for the latest General Hospital spoilers, updates and news.