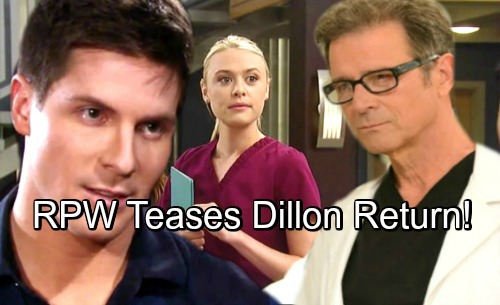 General Hospital (GH) spoilers tease that fans are really missing Dillon (Robert Palmer Watkins) right about now. Kiki’s (Haley Erin) stuck in a real mess with Dr. Bensch (James DePaiva) and her one-night stand with Griffin (Matt Cohen) is about to make it worse. Things have really gone downhill for Kiki since Dillon moved on with another woman in California.

Of course, most viewers weren’t thrilled about that exit for Dillon. Despite a few bumps in the road over Kiki’s medical career, Dillon was devoted to her before he left. Besides, most of his hang-ups about Kiki’s job revolved around Dr. Bensch. Kiki attributed it to jealousy at the time, but perhaps Dillon could sense that Dr. Bensch was trouble.

The doc’s always seemed a bit creepy, so who could blame Dillon for objecting? Dr. Bensch was already getting too close to Kiki back then, which means Dillon’s intuition was spot-on. As for what’s next, GH spoilers say Griffin and Kiki’s hookup could derail her lawsuit plans. Kiki could end up losing this fight and enraging Ava (Maura West) as well.

In other words, Kiki’s life may become a total train wreck. Griffin will do his best to comfort Kiki, so General Hospital may be setting them up as a new couple. Then again, Kiki could decide that it’d be too rough on Ava. After all this blows up, Kiki be desperate to make amends with her mom. Getting together with Griffin could make that more difficult.

Regardless, GH will soon have the perfect opportunity for Dillon’s return. He could come home on a mission to win Kiki back. You can bet Dillon would give Dr. Bensch a piece of his mind. He’s not afraid to throw a few punches around and unleash his wrath.

Next, Dillon could deliver a heartfelt apology and potentially get involved in a love triangle. Kiki might find herself torn between Griffin and Dillon. If she decides to rule Griffin out, that’d make it a bit easier for Dillon to win her over.

Whatever the case, Robert Palmer Watkins seems up for a return stint at GH. In an interview with TresA Magazine, Watkins dished on his old role and hinted at the possibility of a comeback. “It’s really cool that they didn’t kill my character off so there’s always a possibility that they’ll want to bring him back,” Watkins said. “I’d be open to go back for sure…”

Watkins added that he enjoyed bringing Dillon to life. He had nothing but good things to say about General Hospital. “I loved being on that show and I love the whole soap world…I loved the character, so if they wanted to bring me back I would definitely consider it.”

Will GH plan Dillon’s return at some point? Would you like to see Kiki and Dillon’s reunion? We’ll give you updates as other news comes in. Stay tuned to the ABC soap and don’t forget to check CDL often for the latest General Hospital spoilers, updates and news.