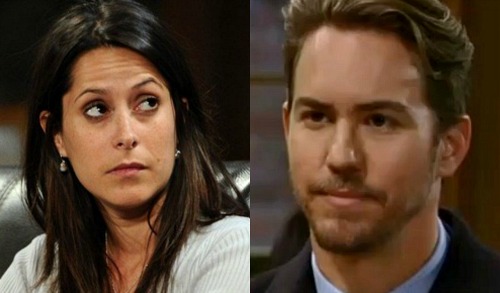 General Hospital (GH) spoilers tease that Anna Devane (Finola Hughes) will find herself in another tricky situation. She may end up torn between her daughter and son soon enough. Anna loves Robin Scorpio-Drake (Kimberly McCullough) with all her heart, so she’ll hate the idea of hurting her. Nevertheless, Anna will have to come clean about her long-lost child and all the complications that brings.

Anna will fill Robin in on Peter August (Wes Ramsey) and the revelation that he’s her son. As if that wasn’t shocking enough, Robin will also have to learn Peter’s real name. She’ll be confused and even angry as Ava drops all these bombs. Robin will undoubtedly wonder how in the world Anna could’ve had a kid with Cesar Faison (Anders Hove). The news will really throw her world out of whack.

Robin’s dealt with quite a bit of Faison trauma in her life. She’s also faced confusion caused by her own mother. When Robin was a young girl, she arrived in Port Charles for the first time. Robin believed Anna was her aunt back then and her father, Robert Scorpio (Tristan Rogers), didn’t even know she existed until she was seven years old.

After Robin found out the truth about her parents, she believed they both died in a boat explosion. Faison set the whole thing up to fake his own death, so that was another way he brought trouble for her family. Poor Robin was also kidnapped by Faison twice as a child and once again as an adult. Faison just wouldn’t stop terrorizing Anna and all her loved ones.

General Hospital spoilers say Robin won’t be thrilled about a half-brother with Faison ties. She’ll feel like they’re never going to escape that monster and the evil blood he’s passed on. Peter held Jason hostage in a Russian clinic, which forced him to lose five valuable years. The bond between Robin and Jason remains strong, so Heinrik’s actions should be a huge issue for her.

After Anna comes clean about this buried secret, Robin may argue that their trust has been shattered. It could take some time to repair the damage. Robin will undoubtedly forgive Anna eventually, but will she ever be willing to get to know Peter? Anna won’t push Robin into anything, but she’ll insist that she wants a relationship with her son. That could be another tough blow for Robin to get past.