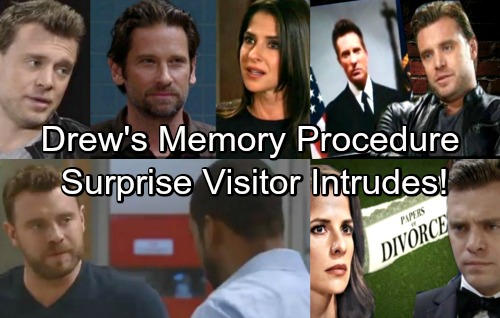 General Hospital (GH) spoilers tease that Drew (Billy Miller) will continue to worry his loved ones. He’s planning on undergoing a dangerous procedure to remove his Jason (Steve Burton) memories. Drew’s currently facing some naysayers who think he should back out, but he’ll stick to his goal. He just can’t go on with Jason’s past swirling in his head.

Drew’s hoping that once his mind is freed, his true memories will come rushing back. He feels like the risk is worth it, but is it really? Andre (Anthony Montgomery) warned Drew that he could die on the table. This is a major decision that could cut Drew’s life short and take him from his children.

Although Drew won’t be too concerned, he’ll undoubtedly take precautions just in case. On June 4, Drew will handle a few arrangements. He may make sure his will’s in order and prepare for the possibility of death. Drew will feel confident in his choice, but it’s still a good idea to have things squared away.

Of course, Sam (Kelly Monaco) will absolutely hate all this. She’ll try to talk Drew out of it, but he’ll refuse to budge. As a result, Sam will take drastic action. It looks like she may have to make an enemy her ally!

General Hospital spoilers say Sam will reach out to someone for help on the new GH episode June 5. Will Franco (Roger Howarth) be Sam’s last resort? Jason will doubt her desperate strategy, but Sam will be willing to try just about anything.

Franco will already have expressed his fears at that point, but Sam could want him to try harder. She knows Franco and Drew have formed a bond lately based upon their shared childhood friendship and trauma. Sam may think Drew’s tuning her out due to the divorce and her feelings for Jason. She might believe Franco stands the best chance of getting through to Drew in that moment.

Franco may not have much luck with heartfelt pleas, but he won’t give up. On June 7, GH spoilers state that Franco will make a bold move. He’ll rev up his mission in a surprising way, so it sounds like he’ll barge in and halt the procedure. Griffin (Matt Cohen) will also face a shocking interruption on June 7, so he could be assisting Andre.

Will Franco stop Drew’s latest memory wipe in time? Is he just delaying the inevitable since Drew’s so determined to do this? Could Drew cancel his plans and find an alternative? General Hospital spoilers say the drama’s about to heat up, so we’ll give you updates as other news comes in. Stay tuned to ABC’s GH and don’t forget to check CDL often for the latest General Hospital spoilers, updates and news.