General Hospital Spoilers: Robin Intervenes With Peter and Anna – Can She Help Mother and Son Bond? 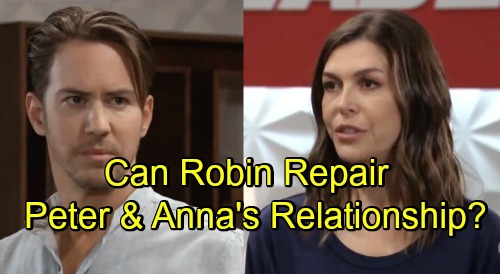 General Hospital spoilers tease that Anna (Finola Hughes) will have an uphill battle when it comes to getting to know Peter (Wes Ramsey). Peter and Anna have spent very little time together since Peter found out that Anna was his birth mother, and that’s been just the way Peter has wanted it.

Peter didn’t take kindly to finding out that Anna gave him away as a baby, especially since his childhood turned out to be so awful at the hands of Faison (Anders Hove), and he’s wanted nothing to do with her. He apparently didn’t even notice (or care) that Anna was gone from Port Charles for so long.

Of course, Anna hasn’t been gone on pleasure. What was supposed to be a trip to visit Robin (Kimberly McCullough) quickly turned into a nightmare, and she was held against her will to lure in Finn (Michael Easton) so that Finn could help Cassandra (Jessica Tuck) come out of her coma. Thankfully, that ordeal is over, and Anna is back in Port Charles.

Now that Anna’s back in town she’s been desperate to bond Peter but he’s been less than receptive to Anna’s reach out. Anna’s attempts to bond with Peter have failed miserably.

Peter completely rejected his mother’s overtures and he wasn’t very nice about it. Peter has said some pretty awful things to Anna and he’s good at laying on the guilt pretty thick.

Maybe Robin will have more luck with Peter than Anna will. Robin will be back in Port Charles soon, and GH spoilers say that she’ll reach out to Peter as well. Peter may feel a bit less guarded around Robin and shouldn’t feel as angry toward her as he does toward Anna. After all, it’s not like Robin’s ever done anything bad to Peter.

Perhaps Robin can help Anna to connect with Peter over time. It would be great to see Robin be able to intervene and bring Anna and her son closer together. However, knowing Peter and his current level of rage toward Anna, that could take some time.

Do you think that Peter will ever soften up to Anna? Stay tuned to the ABC soap and don’t forget to check CDL often for the latest General Hospital spoilers, updates, and news.