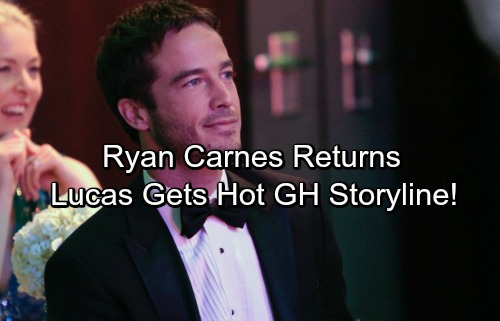 General Hospital (GH) spoilers tease that a familiar face is finally headed back to the ABC soap. It’s been a while since Lucas (Ryan Carnes) popped up in Port Charles, but we should see him soon. Carnes was on set recently, so he must he must’ve shot some great scenes for GH fans to enjoy.

Although Lucas and Brad (Parry Shen) haven’t been around lately, things seem to be going well for them off screen. General Hospital revealed that they were adopting a baby, so that’s exciting news. Will Lucas reveal any more info on that? It can take a while to adopt a little one, but soaps tend to speed everything up. It’s possible Lucas will have an infant in his arms the next time he appears.

Since we’re going to see Lucas, does that mean we might see Brad, too? It’d be nice if they could have some scenes together. Many GH viewers have been tweeting about how much they want Brad and Lucas to have a real story. There’s no sign of it yet, but maybe plans will change down the road.

General Hospital has plenty of episodes to fill year after year, so there’s surely room for Lucas and Brad. If they could at least work them into the rotation a bit more, that’d be progress. For now, Lucas’ comeback is confirmed. Even if it’s brief, we’ll take what we can get. It should be interesting to get updates on the adoption effort and find out how Lucas is doing.

Are you looking forward to seeing Lucas again? Should Lucas and Brad get a meaty storyline? Are there any other characters you’d like to see more of on GH? General Hospital spoilers say fans should stay tuned for some fun drama. We’ll keep you posted as other details emerge. Stick with the ABC soap and don’t forget to check CDL often for the latest General Hospital spoilers, updates and news.