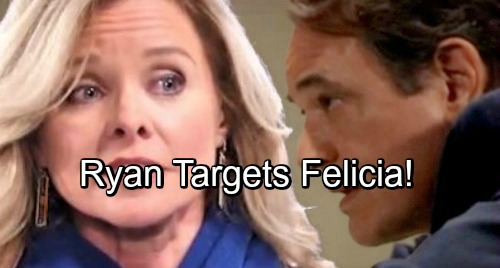 General Hospital (GH) spoilers tease that Ryan (Jon Lindstrom) will put his Kevin (Jon Lindstrom) impression to the test. He knew he had some work to do when he stepped into Kevin’s life, but he was willing to learn all the details and pick up on his brother’s quirks. Now that Ryan’s done his research, he’s ready to take his new identity for a spin.

Ryan’s first test run will be an unexpected one. General Hospital spoilers say Franco (Roger Howarth) will waltz in Kevin’s office for a chat. A confused Ryan will ask a question or two as he works to get a grip on the situation. However, Ryan will manage to latch on to some clues and get the picture. He’ll realize Franco’s a patient and someone who knows Kevin fairly well.

General Hospital spoilers say Ryan will use this surprising dilemma to his advantage. He won’t know Franco or his story, but he’ll offer some guidance anyway. There’s a good chance it’ll be terrible advice, but Franco will probably appreciate it just the same. It looks like he’ll be completely fooled, so that’ll give Ryan some confidence as he gears up for test run number two.

Lucy (Lynn Herring) is next on Ryan’s list of people to see. She considers Kevin a close friend, so Ryan will be upping the ante. GH spoilers state that he’ll take a risk by making dinner reservations for the two of them. When Lucy arrives, she’ll be thrilled that Kevin reached out. Lucy may suggest that it’s been far too long since they gabbed.

Ryan may face a hiccup or two along the way, but he should still pull this off. By the time the evening’s over, Ryan will have no doubts about moving forward. General Hospital spoilers say Felicia (Kristina Wagner) is Ryan’s ultimate target. He’ll know that if he can dupe Lucy, he can dupe Felicia and just about anyone else.

GH fans won’t want to miss all the mayhem Ryan has in store. Felicia could be in grave danger, so she’ll definitely need some heroes sooner or later! We’ll give you updates as other news comes in. Stay tuned to the ABC soap and don’t forget to check CDL often for the latest General Hospital spoilers, updates and news.