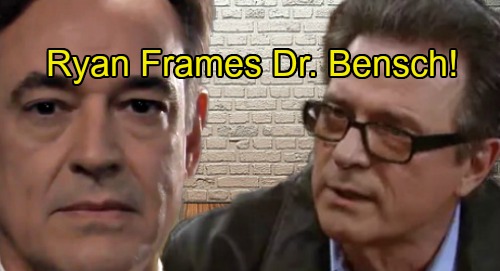 General Hospital (GH) spoilers tease that Ryan (Jon Lindstrom) may have to switch up his scheme. GH fans know his murders tend to follow a typical pattern. He claims the life of a victim and sets the stage for the explosive aftermath. Ryan usually does that by moving the body to another location in hopes of making the biggest splash. He also tends to set someone up to throw off the cops.

Mary Pat’s (Patricia Bethune) body was found with clumps of Carly’s (Laura Wright) hair in her hands. Thankfully, Carly had a solid alibi and got off the hook for the crime. Griffin (Matt Cohen) is having a tougher time since he fought with Kiki (Hayley Erin) publicly before Thanksgiving and the murder weapon was found in his closet.

However, there’s no way the murder charges against Griffin will stick. Jordan (Briana Nicole Henry) doesn’t really believe Griffin did it, so she’ll have to keep digging. Of course, Ava’s quickly becoming a suspect as well. She tried to sabotage Kiki and Griffin’s relationship before the murder mayhem went down. Ava had a harsh grudge, a desire for revenge and a strong motive to kill her daughter.

Even though Jordan will have her doubts about that scenario, this could lead to big trouble. Let’s say Griffin is cleared somehow and Ava remains at the top of the suspect list. It’s easy to imagine Ava getting stressed out over this blame game. She might even give the PCPD a false confession out of pure guilt. Ava may give up on life and decide she should be punished for how the treated Kiki.

Naturally, Ryan wouldn’t be on board with that. He’s fallen hard for Ava, so he doesn’t want to see her locked up. That’s why Ryan quickly intervened when Ava nearly shot Griffin at the police station. He helped her dodge a bullet and he might help her dodge another one. If a shocking new suspect emerges in Kiki’s murder case, that could certainly help Ava out.

That’s where Dr. David Bensch (James DePaiva) might come in. After Kiki won the lawsuit, Dr. Bensch wasn’t pleased. He indeed sexually harassed Kiki, but he didn’t think he should be held responsible. After the doc was fired, he warned Kiki that this wasn’t over. If Ryan does some research, he could easily find another General Hospital character to frame.

Ryan might make it look like Dr. Bensch targeted both Kiki and Griffin for revenge. After all, Griffin testified and did his best to help Kiki win the case. All of that resulted in Dr. Bensch’s firing, so it’d be easy for the cops to believe they found their guy – at least at first. Ryan would just have to plant the right evidence.