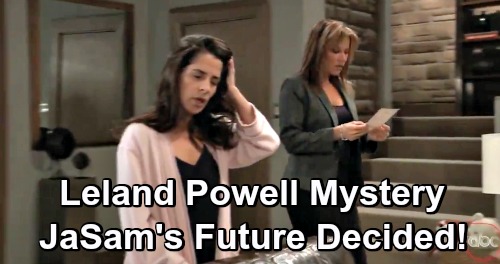 General Hospital (GH) spoilers tease that a new story is kicking off for Sam (Kelly Monaco). She received a mysterious envelope in Monday’s GH episode, December 3. There was no return address, but that was only the first surprise. Sam was stunned to see Leland Powell’s obituary inside. After Alexis (Nancy Lee Grahn) noticed her daughter’s rattled reaction, Sam revealed that he was her husband.

There are certainly a lot of places General Hospital could go with this. Leland was presumably one of the men Sam targeted for money during her con artist days. This could bring up all kinds of old issues, grudges and trouble. It could potentially bring some of Leland’s family members out of the woodwork, too.

Sam hasn’t had much of a storyline lately, so this unexpected delivery could be a good thing. It just might give Jason (Steve Burton) and Sam something to bond over. He’ll undoubtedly want to protect Sam if this leads to any danger along the way. Jason will want to help Sam solve any mysteries she’s facing as well. Finding out who sent this obituary to Sam is a great place to start.

Of course, Curtis (Donnell Turner) will also help Sam out if she asks. They’re partners in the private investigator biz, so Curtis will happily pitch in. On December 13, General Hospital spoilers say Sam will discover something intriguing. She’ll follow a clue or two, so hopefully this storyline will move quickly and get right into the hot drama.

There’s even a chance all this will somehow tie to Kristina’s (Lexi Ainsworth) apparent cult story. GH is keeping Kristina in Sam’s orbit and letting her gush about her new pals. It’s easy to imagine some overlap between Sam and Kristina’s hot plots.

We mentioned how this could bring Sam and Jason closer, which would be fantastic. Those two really need something to jumpstart their romantic reunion. However, we also have to consider the alternative. It’s possible this mess will stir up something that drives Sam and Jason apart. There’s just no way to predict the outcome and what kind of toll it might take.

Regardless, Sam fans should be tickled over the new material. She can only stare at Jason for so long! Sam belongs where the action is, so stay tuned for some fun chaos. We’ll give you updates as other GH news comes in. Stick with the ABC soap and don’t forget to check CDL often for the latest General Hospital spoilers, updates and news.