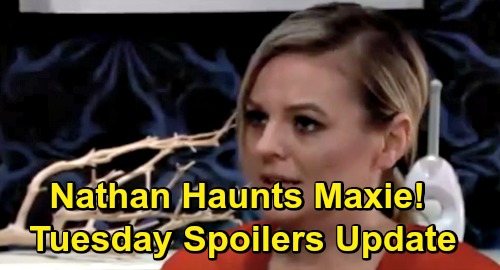 General Hospital (GH) spoilers for Tuesday, December 4, tease that Epiphany (Sonya Eddy) will be back for some fun drama. At GH, Finn (Michael Easton) and Anna (Finola Hughes) will be discussing something when Epiphany moseys over. She’ll catch part of their conversation and scold them over it. Epiphany knows best, so she’ll offer a better way to handle the problems they’re facing.

Over with Maxie (Kirsten Storms), she’ll face questions about her feelings for Peter (Wes Ramsey). Maxie will think it’s too soon to even consider the idea. She’ll have Nathan (Ryan Paevey) on her mind as she mulls over her flood of emotions. Felicia (Kristina Wagner) will push Maxie to truly examine what’s in her heart. She’ll have concerns about Peter, but she won’t want Maxie holding herself back.

Elsewhere, Mac (John J. York) will want to clear the air with Peter. He’ll hope they can reach an understanding about what Mac expects. General Hospital fans know how much Mac cares about Maxie. He won’t want Peter to hurt her, so he’ll set some well-defined boundaries. If Peter dares to go down a dark road again, Mac will assure him there’s going to be trouble.

Other General Hospital spoilers say Margaux (Elizabeth Hendrickson) will remain on edge. She’ll snap at Sonny (Maurice Benard) and warn him about trying anything risky. Margaux is concentrating on other legal matters right now, but Sonny certainly isn’t off her radar. She’ll promise to shift her focus if he crosses her again.

Sonny’s gone a bit soft when it comes to Margaux, so he’ll try to show her some kindness. He wants to keep the peace, but something more could be brewing. Will feelings develop between them at some point? Time will tell, but Sonny will just hope to keep Margaux off his back for now.

In the interrogation room, Griffin (Matt Cohen) will be on the hot seat again. As Chase (Josh Swickard) stands nearby, Jordan (Briana Nicole Henry) will push for the truth about Ava (Maura West). Thanks to Sasha (Sofia Mattsson), the cops now know about the fake sex setup. This will make them take a closer look at Kiki’s (Hayley Erin) mom, but Jordan will want to hear Griffin’s side of this first.

Griffin will share the same tale, but he may argue that Ava wouldn’t have killed her own daughter. She’s a mess over Kiki’s death, so Griffin just won’t think it’s possible. Jordan will agree that something’s off here, but she’ll want to look at all potential angles. You can’t be too careful in a murder investigation.

At Ava’s place, she’ll dismiss Ryan’s (Jon Lindstrom) seemingly crazy confession. Ava will insist that “Kevin” didn’t kill Kiki, but he’ll repeat that he did. Her mind will be spinning over this new info, but Ryan should take this in another direction eventually.

“Kevin” may contend that he should’ve made an effort to reunite Kiki and Ava. Maybe then they would’ve spent Thanksgiving together and avoided such a grim ending. By the time this conversation wraps up, Ava should be touched that “Kevin’s” so invested in her heartache. She doesn’t realize she’s cozying up to the killer himself!