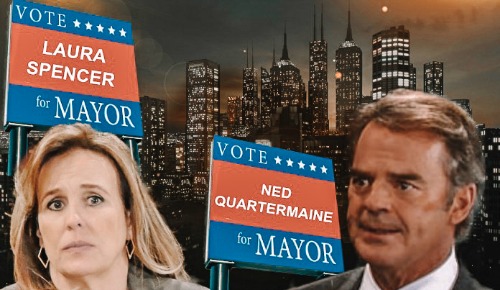 General Hospital (GH) spoilers tease that Ryan (Jon Lindstrom), who’s posing as Kevin (Jon Lindstrom), will have a big surprise for Laura (Genie Francis). He’s been doing his best to put off Laura’s romantic overtures ever since Laura returned home to Port Charles, but Laura suspects that something is wrong. No matter how much Ryan avoids Laura, she seems to track him down and grill him about avoiding her.

It looks like Laura will get a little snoopy, too. GH spoilers say that she’ll find a list of women’s names in Kevin’s office and will question Ryan about it. As it turns out, the names will be a list of Ryan’s prior victim’s, and Ryan will have to come up with a clever explanation to get out of the situation.

Ryan will find all of this attention pretty annoying, and it’s lucky for Laura that Ryan’s not too bloodthirsty right now, or else she’d probably be his next victim. Fortunately for Laura, Ryan seems to want to take his time and select his next victim carefully. But Ryan does need to do something to get Laura off of his case, and it looks like he’ll stumble upon a great strategy.

GH spoilers say that Ryan will come up with an idea to keep Laura busy – he’ll suggest that she run for mayor of Port Charles again! Viewers will remember that Laura previously ran for mayor against Ned Quartermaine (Wally Kurth) but had to drop out when Spencer (Nicolas Bechtel) broke his legs in a skiing accident and she went to tend to him.

Laura will initially dismiss the idea of running for mayor again, saying that she’d rather focus on her family right now, but the idea will grow on her, and General Hospital spoilers reveal that ultimately she’ll become a write-in candidate. And Ryan will be thrilled, as Laura will have something to do other than chase him around. In fact, the mayoral race should keep Laura very busy while Ryan tends to what matters to him most…plotting his next murders.

Do you think Laura will figure out that Ryan has an ulterior motive for encouraging her to run for mayor? Stay tuned to the ABC soap and don’t forget to check CDL often for the latest General Hospital spoilers, updates, and news.