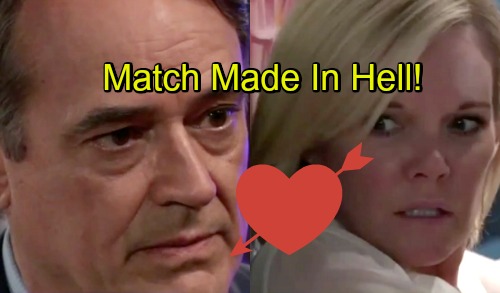 General Hospital (GH) spoilers tease that Ryan (Jon Lindstrom) will have more free time on his hands now that he’s separated from Laura (Genie Francis). Laura’s been a thorn in Ryan’s side ever since she returned to Port Charles. Ryan’s not in the least attracted to Laura, but there is someone he’s totally drawn to…Ava (Maura West).

Ryan seems to love Ava’s vengeful nature, and he feels as though the two of them are kindred spirits on some level. He’s fascinated by her, as she’s different than the other women in his life. Sure, he’s still fascinated by Felicia (Kristina Wagner), but Ava has really taken Felicia’s place in many ways.

Of course, Ava has no idea that her therapist and trusted advisor is a psychopath serial killer. She’s just happy that “Kevin” seems to embrace her true nature. She finds it refreshing that he doesn’t lecture her on having vengeful desires or try to talk her out of being who she really is.

Ava will soon learn about “Kevin’s” separation from Laura, and she’ll be surprised. GH spoilers say that, at least at first, she won’t think about becoming romantically involved with him, but the seed may be planted for a romantic pairing down the road. And it makes sense. The two of them enjoy each other’s company and there’s definitely a spark there.

Look for more therapy sessions, banter, and drinking sessions between Ava and Ryan as their relationship slowly grows. The only problem, of course, is that Ryan really isn’t capable of a real relationship with a woman. But he is capable of deep obsession, and that’s certainly where he’s headed with Ava.

Do you think Ryan and Ava will become romantically involved now that Ryan’s rid of Laura? Stay tuned to the ABC soap and don’t forget to check CDL often for the latest General Hospital spoilers, updates, and news.