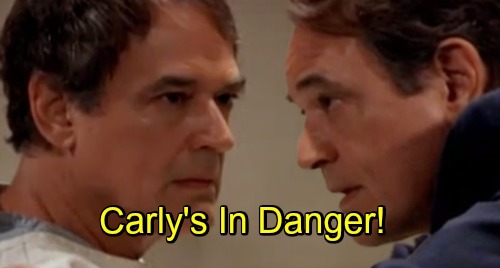 General Hospital (GH) spoilers tease that Carly (Laura Wright) may be done with Ferncliff, but Ferncliff may not be done with her! That was certainly one of the worst experiences of Carly’s life. Thanks to Mary Pat (Patricia Bethune), Carly was drugged throughout most of her stay there. She didn’t know what was going on for the most part, but she still has a few crucial memories.

Carly at least knows there was a mystery patient who claimed to need help. She brushed it off as nothing at first, but that was mainly because she had problems of her own. Besides, Mary Pat and Kevin (Jon Lindstrom) kept insisting that this guy was dangerous.

However, Carly’s thoughts are drifting to that patient again. Despite what everyone was telling her, she had a gut feeling about him. As Carly was being led to electroconvulsive therapy, she happened to bump into Mr. SOS.

In Friday’s episode, August 10, Carly admitted that she thought she saw Kevin. The news left the doc taken aback and GH later confirmed why. “Kevin” approached his brother in a padded cell, so it seems the actual Kevin has been swapped with Ryan (Jon Lindstrom). Poor Dr. Collins will remain locked up while his evil twin continues to impersonate him!

“Kevin” pushed Carly to keep going to therapy. Does Ryan want to keep tabs on Carly and make sure his secret doesn’t get out? While Carly was stuck at Ferncliff, there were times when “Kevin” genuinely acted interested in helping. Unfortunately, he just can’t be trusted.

Ryan may have been trying to pry info out of Carly from the get-go. No one knows his agenda yet, so anything’s possible. We can’t forget how agitated “Kevin” was when Jason (Steve Burton) walked toward the mystery patient’s room. He made sure Jason got fired right after, so “Kevin” was desperate to protect that shocker.

Since memory mapping is still a hot GH topic, Kevin and Ryan may have been among the unknown patients. Peter (Wes Ramsey) pointed out that Dr. Klein had varying degrees of success. The real Kevin still seems to be himself, so maybe things failed on his end. As for Ryan, the plan may have worked better than Dr. Klein ever anticipated.

Remember how the goal was for Drew (Billy Miller) to impersonate Jason and carry out an evil plot? That didn’t really work out, but Ryan is seemingly pulling it off. He’s fairly sweet and at least Kevin-ish with Carly, but a wicked scheme is obviously under the surface.

If Carly gets stuck on her former neighbor and starts asking too many questions, Ryan could get nervous. General Hospital spoilers say “Kevin” will appear troubled on August 23. Carly had better hope she doesn’t connect any dots. She could land in another tight spot if she’s not careful!

Of course, someone has to find the real Kevin and save him sooner or later. Will Carly play a role in tipping somebody off? If she blabs something significant to Laura (Genie Francis), that could kick off the next phase of this story.

General Hospital viewers won’t want to miss the twists and turns ahead. We’ll give you updates as other GH details emerge. Stay tuned the ABC soap and don’t forget to check CDL often for the latest General Hospital spoilers, updates and news.