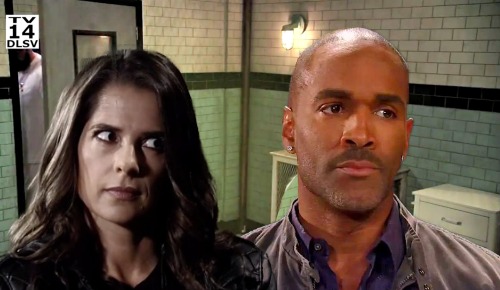 General Hospital (GH) spoilers tease that Sam (Kelly Monaco) and Curtis (Donnell Turner) will be on a mission. After a call from Jason (Steve Burton), Sam will track down her P.I. partner and call for action. They’ll have an important task to take care of, so it’s time to take a little field trip to Ferncliff.

There’s no word on what this is about just yet, but we should consider an intriguing possibility. Carly’s (Laura Wright) nightmare is over for now, but someone else’s nightmare is getting worse every day. A mystery patient was knocking messages through to Carly. He later whispered “SOS” as he passed her in the hall.

All signs point to this mystery man being the real Kevin (Jon Lindstrom), but Carly can’t be sure of that yet. However, she could at least realize something was up. Everyone told Carly the guy was dangerous and nuts. When he indicated that he was being held against his will, Carly brushed it off as nothing. She felt like that was the case for every patient.

Nevertheless, Carly may change her tune pretty soon. Once all the drugs are out of her system and she’s thinking clearly again, Carly may have that mysterious patient on her mind. She knows she wasn’t treated fairly in that place, so she might think this guy’s stuck in an unfair mess, too.

Carly obviously didn’t need electroconvulsive therapy, but Mary Pat (Patricia Bethune) and Dr. Lasaris (Casey Biggs) pushed for it anyway. Jason thankfully showed up in time to save Carly, but what about her former neighbor? Will Carly recap the strange ordeal and urge Jason to check it out?

Jason can’t go back to Ferncliff himself, but GH fans know Sam and Curtis can handle this. Even if Carly doesn’t mention anything at all, they’ll still be around to find clues. On August 2, General Hospital spoilers say Curtis and Sam will arrive at the facility. Will they make a shocking discovery during this visit?

It seems a bit early to actually find Kevin, but they could get a hint to ponder. Anything that inches Kevin closer to freedom will be a good thing! General Hospital spoilers say some twists and turns are coming up, so we’ll give you updates as other GH news comes in. Stick with the ABC soap and don’t forget to check CDL often for the latest General Hospital spoilers, updates and news.