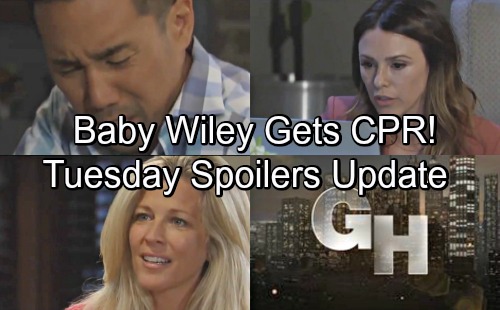 General Hospital (GH) spoilers update for Tuesday, July 31, tease that Robert (Tristan Rogers) and Finn (Michael Easton) will ponder a mystery. As Finn recalls the text messages sent from Anna’s (Finola Hughes) phone, he’ll realize she wasn’t the sender. Robert will note that Anna’s captor must’ve been trying to dupe him. He’ll think it’s time to kick a plan in gear and get Anna home where she belongs.

Finn will agree that they have to act fast. He’ll want to team up, but Robert will suggest that he can take it from here. Nevertheless, GH fans know how persistent Finn can be. He’ll ultimately wear Robert down, so expect an exciting adventure for these two. Meanwhile, Lucas (Ryan Carnes) will start an exciting adventure of his own. He’ll be ecstatic when he learns he’s finally a dad.

Lucas will express his enthusiasm to Julian (William deVry) and prepare for fatherhood. He’ll be anxious to help Brad (Parry Shen) with all the late-night feedings, diaper duty and more. Alas, Lucas doesn’t have all the facts. Brad just found Wiley’s lifeless body in his crib, so he’ll try to get his heart pumping again on Tuesday. He’ll do CPR, but that may not be enough to bring Wiley back.

Elsewhere, Sonny (Maurice Benard) will ignore Michael’s (Chad Duell) warnings. He can’t let another son die, especially not in an explosion! This is all eerily similar to Morgan’s (Bryan Craig) demise, so Sonny will be determined to prevent disaster. He’ll yank Michael out of the vehicle and begin dragging him to safety.

General Hospital spoilers say the car will indeed explode behind them, but Michael and Sonny will survive. That’s all that matters at this point. At the safehouse, Carly (Laura Wright) will freak over Jason’s (Steve Burton) admission. He’ll reveal Michael’s scheme, which was to make Nelle try to kill him.

Carly won’t like the sound of that, but Jason will urge her to have faith. He didn’t like the plot either, but he knows Chase (Josh Swickard) is backing Michael up. Jason will think that should comfort Carly somewhat. He’ll also indicate that this could bring Nelle down, which would benefit Michael and his whole family.

Jason will be worried when he eventually hears about the crash, but good news should follow. Michael’s alive and Nelle could be facing a lengthy prison sentence. There was more danger than Jason would’ve liked, but he’ll believe things will settle down for Carly and Michael soon.

Over with Drew (Billy Miller), he’ll reflect on all the memory-mapping drama. Curtis (Donnell Turner) won’t think his buddy should give up on tracking down his past, but Drew won’t be hopeful about it. He’ll contend that the flash drive’s gone, so he’s going to focus on the future.

However, Drew may be able to get his memories back after all. Margaux (Elizabeth Hendrickson) got the flash drive out of the lost and found box, but she’ll want to do a little investigating. General Hospital spoilers say she’ll pop the flash drive in her computer and look through Andre’s (Anthony Montgomery) secret documents.

Margaux will be quite intrigued by whatever she uncovers. She’ll hope to use this information to her advantage, but how? General Hospital viewers will be anxious to find out! We’ll give you updates as other GH details emerge. Stick with the ABC soap and don’t forget to check CDL often for the latest General Hospital spoilers, updates and news.