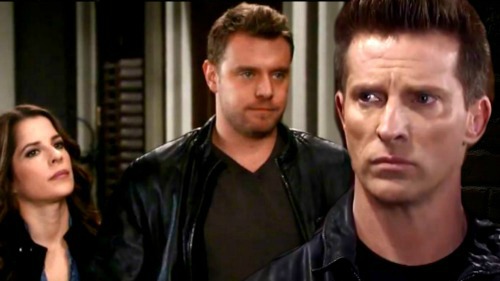 General Hospital (GH) spoilers tease that Drew (Billy Miller) is once again becoming a hurdle for Sam (Kelly Monaco) and Jason (Steve Burton). “JaSam” fans have been thrilled to see some movement in this storyline, but he duo could be taking a step backward. That’s because of Drew and everything he’s going through.

Drew knows leaning on Sam could bring him pain, but he just won’t be able to help himself. No one understands Drew the way Sam can. Their relationship was built on fake memories, but it grew into something else entirely. Despite Drew’s belief that he was Jason, he was always a different man. Having Jason back in town really highlights the differences between them.

Sam was struggling to take the lovemaking leap anyway, so Drew’s crisis is coming at the worst possible time. General Hospital spoilers say Drew will be a bit of a wall for “JaSam.” Sam could grow closer to Drew as she offers support. Will she feel a familiar spark or at least long for what they used to share? Those risks will certainly come with this phase of the story.

That’s music to “Dream” fans’ ears! They’ve been waiting patiently for Drew and Sam to find their way back to each other. There’s no guarantee the exes’ bonding will get that far, but it’s a possibility to consider.

Of course, this would be a disaster for “JaSam” fans. They’ve been waiting even longer for their couple to finally reunite. Unfortunately, Drew’s new love interest options leave a lot to be desired. It’s been sweet to see him co-parenting with Kim (Tamara Braun), but there’s not much chemistry there.

Besides, Kim’s been incredibly impressed with Julian (William deVry) lately. They seem to be solidifying their relationship, so that leaves Margaux (Elizabeth Hendrickson). She’s capable of having chemistry with Drew. We’ve seen Hendrickson and Miller light up the screen on The Young and the Restless before, so we know it’s possible.

Unfortunately, the magic hasn’t been recreated yet. That’s probably due to Margaux’s cold persona. She has to be more than just the bitter DA if GH wants us to care about her. Why would be want Margaux to be happy? She’s given us no real reason to root for her. As of right now, Drew deserves better.

If General Hospital can’t inject some personality into Margaux, they may end up back where they started. Will they just put Drew back with Sam? Would that be a good thing or a bad thing? We’ll give you updates as other GH news comes in. Stay tuned to the ABC soap and don’t forget to check CDL often for the latest General Hospital spoilers, updates and news.