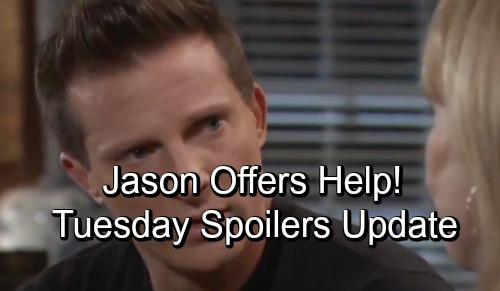 General Hospital (GH) spoilers update for Tuesday, October 16, tease that Spencer (Nicholas Bechtel) will cause more issues for his grandmother. Laura (Genie Francis) just opened the door and saw someone standing outside with a bouquet. Once GH reveals the flower-holder as Spencer, he’ll inevitably face questions from a miffed Laura.

Spencer spent a lot of time with Laura over the past few months. Maybe he’s simply missing her already. On the other hand, this could have something to do with how they left things. After Laura returned home to “Kevin” (Jon Lindstrom), she joked that she was cramping Spencer’s style. Perhaps Spencer feels guilty about pushing Laura to leave.

Either way, Spencer’s got some unfinished business to clear up. As for Laura, she’ll be upset about Spencer booking another flight without her knowledge. General Hospital spoilers say Laura will warn Spencer not to do this again. She’ll point out that when she sends him back to school, he needs to stay put.

Over with Drew (Billy Miller), he’ll get the support he’s craving. Sam (Kelly Monaco) will want Drew to understand just how much she cares. If there’s anything Drew needs, all he has to do is say the word. Sam will be glad to help in any way she can. She may not be able to cure Oscar (Garren Stitt), but that doesn’t mean Drew has to suffer alone.

Elsewhere, Monica (Leslie Charleson) and Jason (Steve Burton) will catch up. They’ll naturally address Oscar’s tumor and the drama that’s brought for his loved ones. Jason will ask for some assistance that could tie in with Oscar. He’ll also want to know what he can do for Monica. Everyone has to come together and lift each other up right now.

On a lighter note, the film festival will get underway across town. Lulu (Emme Rylan) will be happy to unwind with Peter (Wes Ramsey) by her side. She desperately needs a night off from the kids and her Dante (Dominic Zamprogna) troubles.

Of course, Maxie (Kirsten Storms) won’t approve of their evening together. She’ll pretend she’s surprised in Tuesday’s episode, so that probably involves a run-in with Peter and Lulu. General Hospital spoilers say Maxie will be envious of their growing bond. Lulu and Peter are just friends, but Maxie will struggle to believe that thanks to this “date.”

Nina (Michelle Stafford) will get updates on the situation, but she may not think it’s quite so scandalous. She might argue that it’s a night out between pals and nothing more. Still, Maxie will remain jealous as well as protective of Dante’s heart. She won’t want anyone to get hurt here.

Next, Kiki (Hayley Erin) and Griffin’s (Matt Cohen) misfortune will turn into good luck. A film blunder will turn out to be a blessing in disguise. Griffin will realize he mistakenly purchased the wrong tickets, so Kiki will have a nice suggestion. She’ll wonder how Griffin would feel about skipping the festival entirely. Kiki will think they should just watch one of her own movies at home.

General Hospital spoilers say they’ll cuddle under a blanket with some snacks. Love will be in the air, so sex will follow. Griffin and Kiki wanted to go slow, but they just won’t be able to resist hitting the sheets on Tuesday.

Meanwhile, Ava (Maura West) will have another chat with Ryan (Jon Lindstrom). As she continues to rage about Griffin and Kiki, Ryan will become increasingly captivated. He could spark some suspicions by calling Ava a remarkable woman, but maybe she’ll be buttered up enough to brush it off.

General Hospital fans won’t want to miss the twists and turns ahead in Ryan’s storyline. We’ll keep you posted as other GH news comes in. Stay tuned to the ABC soap and don’t forget to check CDL often for the latest General Hospital spoilers, updates and news.