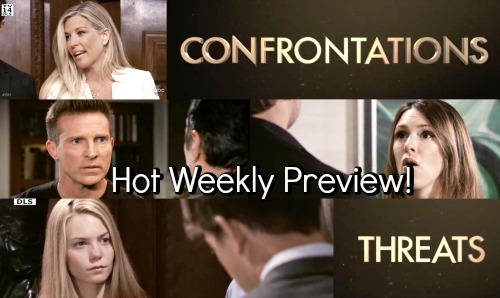 General Hospital’s new promo video teases that we’re in for a week of multiple confrontations and threats. First off, Laura (Genie Francis) is going to be at her wit’s end with Ryan (Jon Lindstrom), who’s impersonating Kevin. “Kevin” just isn’t acting like himself, which Laura has picked up on in many ways. But the thing that bothers her the most is his constant avoidance of her.

Laura wanted a romantic and intimate homecoming with her husband, and she’s gotten anything but. Ryan has been feigning illness to stay away from Laura, and the excuse is getting old. There’s only so long that Ryan will be able to keep pretending that he’s sick. Eventually, Laura’s going to reach her breaking point.

The weekly promo shows Laura finally confronting Ryan and telling him point blank that “you’re not the man I married.” We’ll see how Ryan will get out of this one. If Laura pushes too hard, it’s possible that Ryan will snap and decide to get rid of her permanently. Or will Ryan just talk his way out of this one?

Next on the weekly promo, we see Carly (Laura Wright) getting in a few final words to Nelle (Chloe Lanier) before Nelle’s court date. “Goodbye, Nelle,” Carly says. “God willing I’d never have to see your face again.” Of course, Carly has no idea that baby Jonah is alive and will forever link herself and Nelle.

We’ll see what kind of clues Carly throws out toward Michael (Chad Duell) and Carly during their conversation. Nelle usually can’t help herself from spilling a detail here or there that provides food for thought. And since Brad (Parry Shen) has decided to attend the hearing with “Wiley,” there’s no telling what Nelle might let slip.

We’ll also see a confrontation between Margaux (Elizabeth Hendrickson) and Drew (Billy Miller), as Margaux presses Drew about helping her take down Sonny (Maurice Benard) and Jason (Steve Burton). She’ll argue that she can “still nail Sonny to the wall” without Drew, but that it would be easier with his help.

Drew previously turned Margaux down flat on her offer, but GH spoilers indicate that he’ll reconsider this week, as he’d really like to get his hands on the flash drive that Margaux’s got in her possession. What will he decide?

Finally, in this week’s promo video, Sonny and Jason are shown considering what to do about Margaux. Jason’s been pretty relentless about telling Sonny that they need consider Margaux a threat and act accordingly, but Sonny has been unwilling to take action against her. But in the promo video, Sonny is seen saying, “If Margaux wants to come at me, bring it on.” Has he changed his mind?

It sounds like we’re in for an exciting week in Port Charles! Be sure to stay tuned for all the drama. We’ll give you updates as other news comes in. Stay tuned to the ABC soap and don’t forget to check CDL often for the latest General Hospital spoilers, updates, and news.