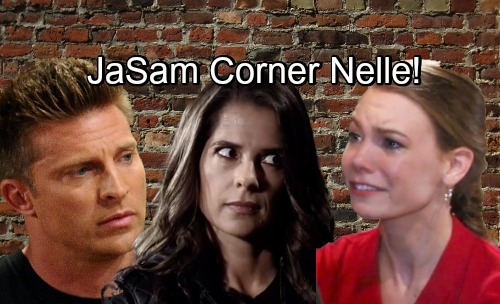 General Hospital (GH) spoilers tease that Jason (Steve Burton) will have some tough tasks to juggle. He managed to score a job at Ferncliff, which will allow him to keep an eye on Carly (Laura Wright). Jason will definitely make some horrific discoveries while he’s there. He’ll realize that Carly’s in total misery, so it’s important to get her out ASAP.

When he’s in janitor mode, Jason will work to protect Carly. He’ll hope he can stop Mary Pat (Patricia Bethune) from driving his bestie off the deep end. However, Jason will have to balance that with work outside the facility. He can’t give up on finding evidence against Nelle (Chloe Lanier). Michael (Chad Duell) is doing his part by working with Spinelli (Bradford Anderson), but it may not be enough.

Jason may seek updates on Spin’s side of things. General Hospital spoilers say they’ll meet up on June 29, so Jason might wonder what’s taking so long. GH fans know “The Jackal” is usually great with tech stuff. After everything they did at the bank in Switzerland, it’s crazy to think Spinelli can’t offer hard proof of Nelle’s lies. She should have a terrible trail, but Spin can’t seem to find it.

The best Spinelli could do was provide a device to swipe Nelle’s info and monitor her key strokes. That way they can catch her if she does anything suspicious. Unfortunately, that may take time. Nelle’s been busy with baby prep, so she’s not on her laptop much these days. She’ll probably slip up eventually, but Jason wants to help Carly NOW.

If Jason wants to make this happen, he’ll need another team member. Fortunately, there’s someone who’ll be glad to pitch in. General Hospital spoilers say Sam (Kelly Monaco) will step up for Jason. June 29 will bring these two together for a hot plot, so “JaSam” will be back in action!

Sam’s thriving in the P.I. business again, so she might take this on as a new case. Perhaps Sam will get Curtis (Donnell Turner) involved, too. After all, he once investigated Nelle for Michael. He could offer some useful insight and potentially put Sam on the right track.

Nelle is gaining enemies left and right, so it won’t be long until she goes down. Who will be the one to seal the deal? Are you ready to see Nelle destroyed? We’ll keep you posted as other GH news comes in. Stick with the ABC soap and don’t forget to check CDL often for the latest General Hospital spoilers, updates and news.