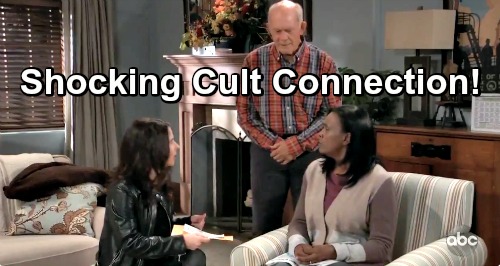 General Hospital (GH) spoilers tease that several storylines are coming together for some shocking revelations. Sam (Kelly Monaco) found out the name of the Galena newspaper subscriber and headed off to get some answers with Curtis (Donnell Turner). Unfortunately, they walked away with more questions instead.

Yvonne (Janet Hubert) is the subscriber, but her memory issues make it impossible for her to know if she sent the obituary to Sam. Based on what came after their conversation, it looks like someone younger and sneakier is to blame. Daisy (Kelsey Wang) got her hands on the newspaper Yvonne and Sam left behind, so it’s clear that she fits in this hot plot.

From the get-go, there’s always been something a little off about Daisy. She’s cheerful to the point of phoniness and the cult she’s pushing is obviously bizarre. Plus, we have to think about the people Daisy has been drawn to. It’s no coincidence that Daisy handed out flyers at Julian’s (William deVry) pub and tried to make friends with Kristina (Lexi Ainsworth). They both have connections to Sam.

Even Oscar is connected in a roundabout way. Drew (Billy Miller) is Oscar’s father as well as a father to Scout and an uncle to Danny (T.K. Weaver). Despite their divorce, Drew also remains close to Sam. He’s been leaning on her throughout this Oscar nightmare, so Daisy may know much more than she’s letting on. She may be carrying out some mission for the cult leader with the info she was given.

This is clearly a major puzzle piece, but there are still some missing. If the cult leader is indeed to blame, who is this person? Why does he or she want to target Sam? How does Leland Powell tie in with it all? It’s possible the cult leader is a relative of Leland Powell. Sam’s actions may have done more damage than she realizes, so this may be some sort of revenge scheme.

Daisy might just be following orders like we previously suggested. Then again, she could have some sort of personal connection to Leland. If Daisy’s a relative, that could certainly affect the story. Whatever the case, General Hospital spoilers say Sam will get closer to the truth soon. She’ll catch on fast, so Daisy should end up on the hot seat.

Kristina isn’t going to appreciate that, so GH viewers can expect some conflict. On December 19, Kristina will confront Sam about her behavior. She may feel like Sam’s being too pushy with Daisy, but she doesn’t know there’s much more to her friend than meets the eye.

General Hospital fans won’t want to miss the shockers ahead. We’ll give you updates as other GH news comes in. Stay tuned to the ABC soap and don’t forget to check CDL often for the latest General Hospital spoilers, updates and news.