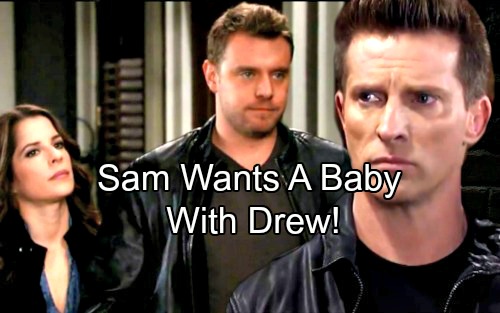 General Hospital (GH) spoilers tease that Sam (Kelly Monaco) and Drew (Billy Miller) will have something to celebrate on this week’s new GH episodes, February 26 – March 2. Scout’s birthday is almost here and that means it’s time to treat their precious daughter like a princess. Drew and Sam will get plenty of toys for the birthday girl. They’ll marvel at how fast Scout’s growing up.

After Jason (Steve Burton) came home, Drew was forced to give up the title of Danny (T.K. Weaver) and Jake’s (Hudson West) father. They still consider Drew to be another dad, but it’s not quite the same. Drew also gained a kid through Oscar (Garren Stitt), but he missed all of his childhood. Oscar’s already on the verge of becoming a man.

Perhaps Drew would like another little one in his life. Would Sam be open to the idea? She just might! Sam recently had an interesting chat with Jason. She suggested that maybe Drew’s memory mission would be like couples who struggle to have a baby. When they give up and the pressure’s off, sometimes that’s when a pregnancy happens.

Sam was just trying to make a point, but it’s intriguing that she chose a pregnancy-related analogy. Could Sam already have babies on the brain? That might’ve been the show’s way of laying the groundwork for what’s to come. 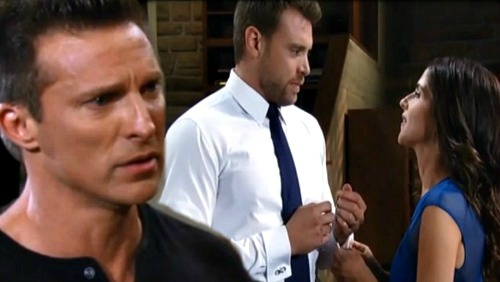 GH fans know Sam is committed to a future with Drew, but she can’t seem to shake her feelings for Jason. Having another baby with her husband would cement their future in Sam’s mind. She might think this will show everyone (including herself) that Drew’s the person she wants to be with.

On March 9, General Hospital spoilers say Sam will take a big step. Could she go off birth control? Will Drew and Sam start trying for another kid? That sounds like a somewhat dangerous plan since Sam’s still feeling tempted by Jason. If she caves in eventually, there could be trouble! We all know how soaps love a good paternity mystery.

Nevertheless, Drew and Sam’s marriage will remain on solid ground for now. Would you like to see them add another child to their family? We’ll give you updates as other General Hospital news comes in. Stay tuned to ABC’s GH and don’t forget to check CDL often for the latest General Hospital spoilers, updates and news.