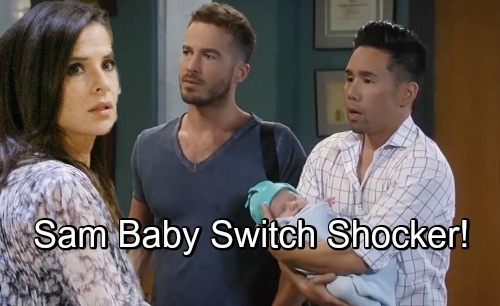 General Hospital (GH) spoilers tease that the baby swap storyline will pull in plenty of characters. Between “Brucas” and Michael (Chad Duell), there are connections from every angle. Brad (Parry Shen) traded dead Wiley for live Jonah, so he’ll remain on edge. He’ll just hope the switcheroo he made with Nelle (Chloe Lanier) stays under wraps.

While Lucas (Ryan Carnes) dotes on the bouncing baby boy, Michael will continue to mope. Jason (Steve Burton) couldn’t be there for distraught Michael recently, so he asked Sam (Kelly Monaco) to step up. Those heartfelt scenes could become a crucial part of the story down the road.

GH fans will also recall Sam’s first visit with “Wiley.” She was thrilled to see Lucas so happy and in love with his new son. In other words, Sam’s seen the baby euphoria of the “Brucas” home along with total devastation in the Quartermaine nursery.

General Hospital could be sticking Sam in the middle for a reason. Perhaps they intend to leave her with a big decision eventually. Let’s consider how this might play out. GH seems to be inching “JaSam” toward their long-awaited reunion, so that should be here soon enough. Maybe that’ll be another important piece of the puzzle.

Sam may finally commit to Jason and agree to begin their future together. They could form a happy family again and end up on cloud nine. That’s when Sam could become privy to Brad’s secret. Julian (William deVry) might learn about the baby switch and fill Sam in. He may be forced to reveal it or simply feel the need to tell someone.

This is sure to be a stressful situation, so it’d be understandable for Julian to seek advice. He might opt for Sam instead of Alexis (Nancy Lee Grahn) since the lawyer might blab right away. What about Sam? Would she be willing to crush her brother and rip that baby from his home? Loyalties will likely be tested as this storyline moves forward.

Sam knows how much Michael means to Jason. She cares about Michael as well, so leaving him in the dark would be tough. On the other hand, Michael may have worked through most of his grief by then. He could be in a much better place, so Sam may wonder what the harm would be. The kid’s got loving parents, so Sam may think that’s what matters.

Is Sam opts to keep her mouth shut, that could mean disaster for “JaSam.” Jason would inevitably find out later and rip into Sam over this. Could their fresh reunion survive such a huge blow? Of course Sam would most likely reveal the truth simply because it’s simply the right thing to do.