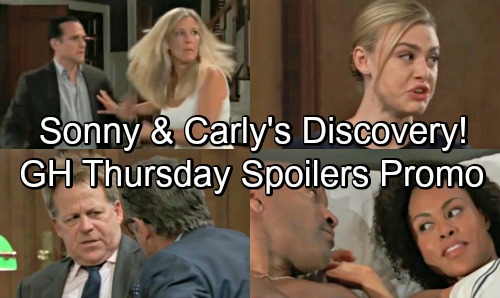 General Hospital (GH) spoilers for Thursday, August 9, tease that Franco (Roger Howarth) will push Alexis (Nancy Lee Grahn) to shut up and listen. The outcome of the case could depend on it! Naturally, Alexis will wonder what’s so urgent. She definitely won’t appreciate this interruption, so she’ll suggest Franco had better have a solid reason for causing drama.

Scott (Kin Shriner) pushed Franco to tell Alexis about Kiki (Hayley Erin) and Griffin’s (Matt Cohen) one-night stand. She needs to know so she can avoid asking any risking questions, but will Franco really be able to explain? The trial is about to start, so he may be shooed away at the last second. Franco will somehow manage to make the situation worse, so Alexis might get the wrong idea about his mission.

Nearby, Ava (Maura West) will notice that Franco’s not with Liz (Rebecca Herbst). She’ll find it peculiar when she sees him pestering Kiki’s lawyer, so she may be the one to drag him away. Once the trial begins, there’ll be plenty of tension in the courtroom. Scott will obey Ava’s orders and attempt to subtly sabotage himself. Unfortunately, Dr. Bensch (James DePaiva) will quickly pick up on his blunders.

General Hospital spoilers say Dr. Bensch will keep his voice down, but he’ll certainly be irritated. He’ll accuse Scott of trying to throw the case, so the pressure will rise. Dr. Bensch might even threaten to have Scott disbarred for this. It sounds like Scott will remain stuck in a real jam.

Once Kiki takes the stand, she’ll share her difficult story and break down in tears. Kiki will argue that Dr. Bensch can’t keep doing this to vulnerable women. He’s abusing his position of power and it’s not right. Kiki will score some points for herself, but trouble’s brewing. Things may not go as well when Griffin eventually testifies!

Across town, Sonny (Maurice Benard) will enjoy having Carly (Laura Wright) back home. It took some hard work and a team of people who care about her, but Carly will finally be off the hook. Joy will fill the Corinthos home again, but the peace won’t last long. When Sonny and Carly hear a crash, they’ll be startled and rush over to investigate.

There’s a good chance Mike (Max Gail) will break something. This could spark quite a meltdown and convince Sonny to put his dad in a facility. GH spoilers say Sonny will have a bittersweet afternoon, so that lines up with his happiness over Carly and potential despair over Mike.

Over with Jordan (Vinessa Antoine), she’ll make a bold move. We haven’t seen a lot of sexy “Jurtis” moments lately, so Jordan will hope to rectify that. General Hospital spoilers say Jordan will have a surprise for Curtis (Donnell Turner). It looks like she’ll treat him to a day of romance and lovemaking, so Curtis will push to do this more often.

GH viewers won’t want to miss the ups and downs of Thursday’s episode. We’ll give you updates as other news comes in. Stay tuned to the ABC soap and don’t forget to check CDL often for the latest General Hospital spoilers, updates and news.