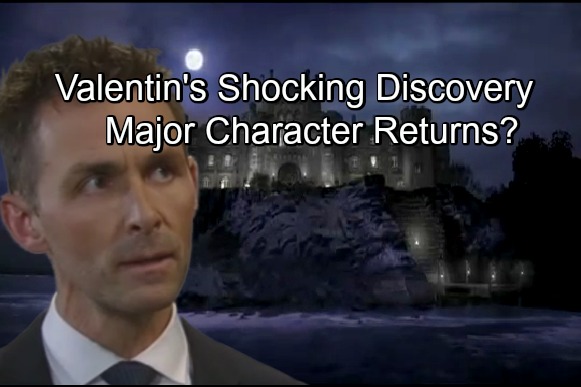 General Hospital (GH) spoilers tease that Valentin (James Patrick Stuart) will continue to pine over Nina (Michelle Stafford). He desperately wants to earn her forgiveness and put their family back together. However, it doesn’t look like Nina will be ready to do that anytime soon. Valentin will just have to suffer without her, but at least a major distraction’s brewing.

On August 20, Valentin will make a shocking discovery. He’ll stumble across a stunning family secret, so this should kick off a new storyline – or at least a new phase of an old one. General Hospital spoilers say the show’s been setting this up for a while now. First, there was the Cassadine conundrum box. That could still serve as some kind of clue as this hot plot moves forward.

Alexis (Nancy Lee Grahn) also sought information about Mikkos (John Colicos) and her mother, Kristin Bergman. That GH story suddenly dropped off, but there were probably several good reasons for that. The main one was likely Nelle’s (Chloe Lanier) exit. General Hospital needed to give Nelle the proper sendoff and set up all the baby switch mayhem, which will drive another story for months.

Kristina’s (Lexi Ainsworth) return may have been a factor as well. If Ainsworth wasn’t available sooner, the show may have wanted to hold off until Kristina could be in Port Charles. Alexis may be tied to the secret Valentin uncovers, so it makes sense that she’d need all her daughters around for this.

What bombshell will Valentin come up with? It sounds like a biggie, so someone believed to be dead might be alive. Alexis’ mother, Stefan (Stephen Nichols) and Nikolas (last played by Nick Stabile) immediately come to mind. The last two options would be the most appealing.

Nichols is no longer at Days of Our Lives, so General Hospital might’ve snatched him up for a return stint. Then again, they might be recasting the role of Nikolas. That’d be a great idea since Laura’s (Genie Francis) finally headed back to town soon.

Of course, Valentin could find out some other deep, dark secret. Whatever it is, it could turn the Cassadine clan upside down! We’ll give you updates as other GH news comes in. Stay tuned to the ABC soap and don’t forget to check CDL often for the latest General Hospital spoilers, updates and news.