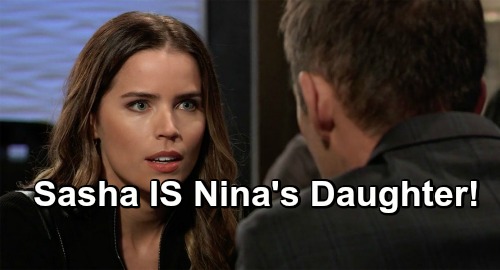 General Hospital (GH) spoilers tease that a major bombshell could be brewing in Valentin’s (James Patrick Stuart) fake daughter plot. GH likes to do a twist on a twist occasionally. They received plenty of praise when they put an intriguing spin on the baby swap trope. New soap moms are usually trying to steal a baby after their own dies. Nelle (Chloe Lanier) gave her perfectly healthy one away instead.

With that in mind, perhaps General Hospital’s cooking up a twisty end to Valentin and Sasha’s (Sofia Mattsson) scam. The predictable route is for Nina to discover that they lied and ultimately find her real daughter. How could GH shake that up? By making Sasha the real daughter after all! Let’s consider the facts and how the show could pull this off.

Liesl Obrecht (Kathleen Gati) was taken aback when she learned Nina’s child had survived. She insisted Nina had a miscarriage, so she’s in the dark on any true bio kid developments. Nevertheless, it’s doubtful GH would do this storyline without a genuine daughter at the end of it. That would be a total letdown.

Plus, we’ve got that heart pendant to consider. The other half must be out there somewhere and it has to be significant. Curtis (Donnell Turner) was also involved in the search for Sasha to make sure Nina believed all this was legit. General Hospital fans will recall how all the evidence lined up. Curtis followed a trail straight to Sasha, so why can’t she still be in the running for Nina’s actual child?

It’s possible Valentin planted those clues for Curtis to find, but it’s equally possible he took advantage of a trail that was already there. Now let’s talk about what Liesl witnessed. She saw Valentin take DNA from Madeline’s (Donna Mills) corpse to make sure the two tests were matches. It appears Curtis only thought Sasha and Nina’s DNA were tested.

In reality, Madeline must’ve been tested against Nina – and boom – instant daughter proof. That means Sasha’s DNA is still an unknown here. Who does she actually belong to? There’s no reason it can’t be Nina. Sasha got to know Nina and really started to care about her throughout this con job. Her scamming heart was warmed right up, so maybe that’s due to a real mother-daughter connection.

General Hospital viewers have noticed the resemblance between Britt (Kelly Thiebaud) and Sasha. Why did the show cast someone who looked so much like Britt? Perhaps it’s because Sasha’s actually part of Nina’s family. If they intend on Willow (Katelyn MacMullen) being the real deal, it was a horrible casting choice. She looks absolutely nothing like Nina or her relatives, so it wouldn’t be believable at all.

Finally, why do all this buildup to a Valentin and Nina reunion only to throw it away? They’re clearly on the verge of getting back together. If this was an outright lie and no daughter would be found, there’d be no coming back from that. Valentin would most likely lose Nina forever over pain that deep.

Nina and Valentin’s reunion may be salvageable if another daughter option surfaces, but a surefire way to save it is if Valentin was unknowingly right all along. Since Sasha obviously believes she’s duping Nina, it’d be a great surprise for her, too. All three of them could be stunned when the scam isn’t really a scam.

Nina might uncover Valentin’s deception and blow her top, but that’s when Sasha could come strutting back into town with the other half of the heart pendant. They could test her DNA for real this time and voila! Nina would still have the daughter she’s bonded with and Sasha could finally open her heart all the way. How could Nina hold a happy ending like that against Valentin for too long?