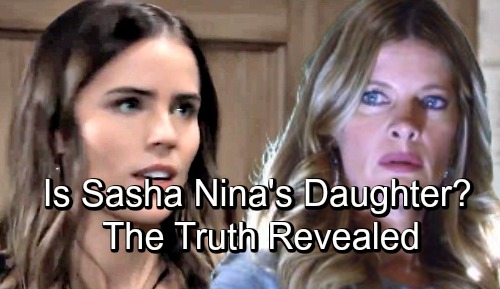 General Hospital (GH) spoilers tease that a new character is making some waves in the soap world. GH fans were surprised when a lovely young woman named Sasha (Sofia Mattsson) showed up on screen. Curtis (Donnell Turner) sat down with her and admitted that she may be his friend’s daughter.

Of course, we know Curtis is talking about Nina (Michelle Stafford). He’s doing everything he can to pull off Valentin’s (James Patrick Stuart) mission to reunite Nina with her long-lost child. Curtis’ search took him in Sasha’s direction, but is she really the daughter Nina’s missing? It all seems a bit too easy if you ask us.

Sasha certainly looks like she could be Nina’s daughter. She even likes horses, so Curtis took that as a big clue. However, it’s doubtful GH would reveal Nina’s kid so soon. They tend to take their time telling stories like this.

Besides, there’s still half a heart pendant to consider. General Hospital wouldn’t introduce that element without providing the other half. If Sasha doesn’t have the missing piece, she’s not the daughter Nina’s seeking.

Obviously, Curtis doesn’t know he should be looking for that pendant half. It’s possible Sasha has it and doesn’t realize it, but we’re betting that’s not the case. There’s even a chance that Sasha could try to con Nina. She shut down the idea that she was secretly adopted, but maybe she’ll change her tune.

Sasha took the DNA kit home and promised to hand it over later. That scenario is just begging for some mischief. We don’t know Sasha and what her motives might be, so we can’t trust that she won’t rig the test somehow. If Sasha thinks there could be some money in this, she could resort to some manipulation.

Then again, Sasha could play by the rules and simply let the results show she isn’t Nina’s daughter. Whatever the case, General Hospital spoilers say there’s much more to come in this shocking storyline. Valentin and Nina’s searches will take them down very different roads, so it should be interesting to see how it all comes together.

Do you buy the idea that Sasha is Nina’s grown child? Will Nina find another stunning possibility instead? We’ll give you updates as other GH news comes in. Stay tuned to the ABC soap and don’t forget to check CDL often for the latest General Hospital spoilers, updates and news.