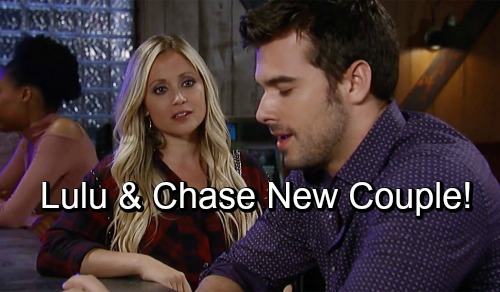 General Hospital (GH) spoilers tease that Lulu (Emme Rylan) will be a busy gal in the coming weeks. The anniversary of Ryan Chamberlain’s (Jon Lindstrom) crime spree is coming up, so Lulu’s been assigned to the piece for The Invader. That’ll take up plenty of her time, but she’ll manage to squeeze in some other tasks as well.

It’s clear that Peter’s (Wes Ramsey) hung up on Maxie (Kirsten Storms) and the bond they used to share. He’d love to make amends and start redeeming himself, but Lulu will remain protective of her friend. General Hospital spoilers say Lulu won’t want Maxie getting hurt, so she’ll be sure to put Peter in his place. There have to be some boundaries until Maxie’s heart has healed.

However, Lulu also deserves to have a little fun. She can’t just work and watch out for the people she cares about. Since Dante’s (Dominic Zamprogna) out of the picture right now, Lulu must be feeling pretty lonely. That’s probably why she’s been OK with throwing herself into her writing, but she’ll have to cut loose sooner or later.

Meanwhile, General Hospital spoilers point to a potential love story for Chase (Josh Swickard). He’s one of Port Charles’ most eligible bachelors, so GH should really get him involved with someone ASAP. Unfortunately, “Lante” fans may not like where this is headed.

On October 1, Chase and Lulu’s connection will grow stronger. They’ll spend some time bonding, which sounds like it could spell trouble – depending on how you want to look at it! It hasn’t been that long since Dante took off on his mission, so it’d be a shame for Lulu to inch toward a betrayal already.

At the same time, General Hospital can’t keep Lulu stuck in limbo forever. Emme Rylan deserves a new storyline and a hunky love interest for her character. There’s no guarantee Chase and Lulu will get together, but that certainly seems to be the plan.

The show laid the groundwork by having Lulu take care of Chase when he was drunk. Plus, Chase was Dante’s partner at the PCPD. That’ll add another layer of drama to all this, so it’s a no-brainer to pair Chase and Lulu up. After their next round of bonding, attraction could start to grow. Friendship often turns to love on soaps, so viewers should keep an eye on Lulu and Chase’s bond.

Are you rooting for Chase and Lulu as a couple? Could they get together just before a Dante recast emerges? We’ll give you updates as other GH news comes in. Stay tuned to the ABC soap and don’t forget to check CDL often for the latest General Hospital spoilers, updates and news.