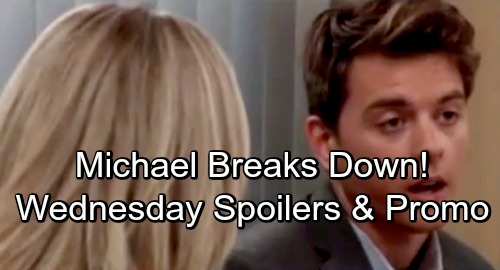 General Hospital (GH) spoilers for Wednesday, September 19, tease that Ava (Maura West) will seek updates from Julian (William deVry). She’ll probably wonder if there’s any other news on the explosion and corpse investigation. Ava will feel like Julian’s leaving something out, but her brother may choose to stay tight-lipped on the details.

Although Ava knows how to keep a secret, she isn’t exactly the most trustworthy person around town! Besides, it’s not a good idea to hand over ammunition against Sonny (Maurice Benard). While Julian tries to dodge Ava’s questions, Griffin (Matt Cohen) will face a tough blow. He’ll run into Kiki (Hayley Erin) at GH and declare that someone just ripped away the last thing he had in this world.

General Hospital fans know Griffin was suspended thanks to Ava. He was hoping to be reinstated, but maybe that plan didn’t pan out. While Kiki comforts Griffin, Curtis (Donnell Turner) will pass along some info to Valentin (James Patrick Stuart). Curtis just met with a young woman he believes could be Nina’s daughter, but he won’t want Valentin to get his hopes up just yet.

It’s best to proceed with caution and get all the facts before filling in Nina (Michelle Stafford). The last thing Valentin would want is for his love to get hurt. Elsewhere, Peter (Wes Ramsey) will insist he doesn’t want to hurt Maxie (Kirsten Storms) either. He’ll have a conversation about that with Lulu (Emme Rylan), who’ll argue that Maxie’s awfully vulnerable right now.

Peter may promise that he’s not going to make any moves. He just longs to be close to Maxie again, but Lulu might contend that he should give it some time. In the meantime, Maxie will have to provide an explanation. Nina will bring up the elevator encounter and wonder what in the world she was looking at. Peter came out of the lift shirtless and gasping for air, so it obviously looked a bit scandalous.

Nevertheless, Maxie will assure Nina that nothing happened between them. She simply helped Peter work through a panic attack, but Nina will still be wary. After all, that ordeal seemed to bring Peter and Maxie closer. Nina could easily pick up on that and urge Maxie to keep her guard up.

Back at GH, Michael (Chad Duell) will start to crumble again. Dealing with his grief has been pretty rough. During a chat with Carly (Laura Wright), Michael will confess that he’s not OK. General Hospital spoilers say Carly will gladly be there for her son. She’ll let Michael know that he doesn’t have to go through this alone.

It sounds like some gripping scenes are on the way. We’ll keep you posted as other GH news comes in. Stay tuned to the ABC soap and don’t forget to check CDL often for the latest General Hospital spoilers, updates and news.