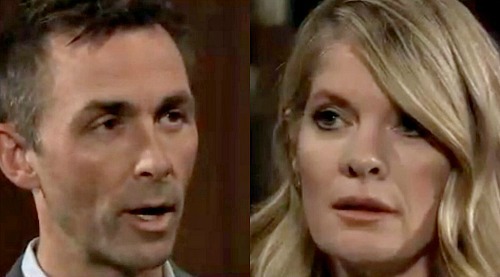 General Hospital (GH) spoilers tease that Valentin Cassadine’s (James Patrick Stuart) secret will come back to bite him. He avoided a disaster after Peter August (Wes Ramsey) recanted his story and allowed Liesl Obrecht (Kathleen Gati) to go free. However, GH fans know Valentin was just delaying the inevitable. Sooner or later, the daughter plot Valentin cooked up will be exposed.

Of course, that’s more problematic than ever since Valentin finally has what he wants. Being a family with Nina Reeves (Michelle Stafford) and Charlotte Cassadine is all that really matters to him. Valentin was thrilled when Nina agreed to a reunion, but what happens when the truth comes out? The one thing Nina’s spent years longing for will suddenly be ripped away again.

You can bet Nina will rip away the one thing Valentin has longed for, too. His chance at life with Nina and Charlotte will instantly crumble. There’s no way Nina’s going to give Valentin a pass for this – not without a soap miracle!

Fortunately, General Hospital likes to hand those out from time to time. Nina and Valentin still have a shot at happiness, but it’ll take a twist to give it to him. There’ll need to be some major bombshell that changes the game once more. Let’s consider three ways GH could save Valentin and Nina’s reunion.

The first one is pretty simple. Valentin could stumble across info that points to Nina’s biological daughter and still give her the child she’s always wanted. That option is the weakest plan since Nina has already bonded with Sasha Gilmore (Sofia Mattsson).

Nevertheless, it’s reasonable to think Nina could soften after many months of connecting with the real deal. This wouldn’t be an instant fix for Valentin and Nina, but it could still have an “all’s well that ends well” outcome. Valentin would still be responsible for bringing Nina and her actual daughter together, so she couldn’t stay mad over his original deception forever.

A slightly better option is for Sasha to be the real daughter after all. It appears Madeline Reeves’ (Donna Mills) DNA was tested against Nina’s to get those fake results. If Sasha’s DNA was never truly tested, who’s to say she isn’t Nina’s child? Sasha looks a lot like Britt Westbourne (Kelly Thiebaud), so there’s obviously a family resemblance.

We’ve also watched Sasha come to care about Nina – almost as if she were her real mother. The big twist at the end of this storyline could be that Sasha’s the daughter and Valentin had no idea. Again, how could Nina stay angry when Valentin gave her what she wanted? It’d be another outcome where it all works out, so Valentin and Nina could still have their future.

The third option could be a true shocker, but it’s at least worth mulling over. Nina has enjoyed getting to know Sasha, but a baby is what she really craved. It’s fine to reunite with an adult daughter, but Nina missed out on all the childhood years. She once seemed bummed about that during a chat with Franco Baldwin (Roger Howarth).

Will Nina miraculously realize she’s pregnant after her blowup with Valentin? She’s been told there’s no hope, but that means nothing on a soap. General Hospital could still give Nina the baby she’s yearned for. Babies often bring couples back together on daytime dramas, so this could be the answer to all Valentin’s problems.