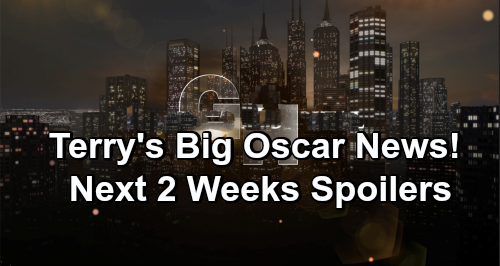 General Hospital (GH) spoilers for the next two weeks tease that some stunning moments are on the way. During the week of December 31-January 4, Ryan Chamberlain (Jon Lindstrom) will do something truly shocking. He’ll actually show support for Laura Collins (Genie Francis)! Of course, Ryan will undoubtedly have an agenda. He doesn’t care about Laura at all, so he’ll just be trying to butter her up.

Ryan needs to keep Laura at bay if he wants to continue posing as Kevin Collins (Jon Lindstrom) and causing destruction. He may get her suspicions to die down for now, but it won’t be long until they rev up again.

Liesl will bounce little James West around and most likely bring up Nina’s new daughter. She knows Valentin Cassadine (James Patrick Stuart) is lying, so it would be very Liesl-like for her to say something cryptic with a smile. Nina may wonder what Liesl’s hiding by the end of this strange chat.

Over with Drew Cain (Billy Miller), he’ll have a lot on his mind. Oscar Nero (Garren Stitt) is in the clinical trial, but he’s not out of the woods yet. That’ll weigh on Drew, but so will his recent kiss with Oscar’s mom.

Does Drew have real feelings for Kim Nero (Tamara Braun)? He may not even be sure about that himself! Perhaps Curtis can help Drew sort things out in his head and hear.

Next, Elizabeth Webber (Rebecca Herbst) will contact Willow Tait (Katelyn MacMullen). GH spoilers say Liz will remain concerned about Aiden Webber (Jason David) and the bullying drama. She’ll get reassurance that Willow will keep a close eye on Aiden at school and watch how the other kids are treating him.

After Kim gets dumped by Julian Jerome (William deVry), she’ll learn the facts of the situation during the week of January 7-11. General Hospital spoilers say Kim will realize Julian spied her New Year’s Eve kiss with Drew. She’ll figure out that Julian thinks she should be a family with Drew and Oscar.

Drew will get updates and confront Julian over all this eventually. That could bring some harsh words and accusations on both sides. Over with Alexis Davis (Nancy Lee Grahn), she’ll find herself drawn to Julian again.

Once he’s single, Julian’s relationship with Alexis will become increasingly complicated. It’s a familiar tale for “Julexis” the chemistry magnets!

Dr. Terry Randolph (Cassandra James) will also have news on Oscar’s condition. Will it be good or bad? That depends on how Oscar’s responding to the treatment by then.

Elsewhere, Sam McCall (Kelly Monaco) will get some help from the two most important men in her life. Jason Morgan (Steve Burton) will continue to assist Sam with the case of the mysterious emails.

As for Drew, he’ll come through for Sam in another way. General Hospital spoilers say Sam will help Drew as well, so they might have a chat about truly moving on. It’d be fitting since Sam’s on the verge of a Jason reunion and Drew’s inching toward Kim.

Regardless, the next two weeks will bring some fantastic scenes. We’ll keep you posted as other GH details emerge. Stay tuned to the ABC soap and don’t forget to check CDL often for the latest General Hospital spoilers, updates and news.