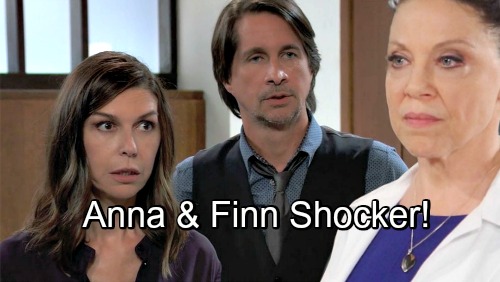 General Hospital (GH) spoilers tease that Jason Morgan (Steve Burton) and Robert Scorpio (Tristan Rogers) will continue their desperate search. They’re on a mission to find Anna Devane (Finola Hughes) and Dr. Hamilton Finn (Michael Easton), but they could make some other shocking discoveries along the way. This journey will definitely come with some intriguing information.

Cassandra Pierce (Jessica Tuck) was revealed as the mystery patient Finn was summoned to treat. Some of her backstory was exposed through her link to Valentin (James Patrick Stuart), but there’s no guarantee we know everything. It’s possible there’s a Boronsky Clinic connection that’s still to come.

There were five other patients before Jason, so Cassandra – or her surprise twin – might’ve been one of them. The Cassandra we saw could’ve been post-programming. Then again, Cassandra could’ve been in on the memory-mapping project somehow. She might’ve helped back it since she was into all sorts of shady criminal activities.

Regardless, Jason and Robert’s quest for answers could lead them to Liechtenstein. Peter August (Wes Ramsey) claims the patients were moved there for further study. Of course, he doesn’t have all the latest info. There’s a chance that some patients are still captive while others have been sent on the missions they were meant for.

All of the Boronsky patients appear to have been test subjects for experimental medical procedures. GH viewers will recall that Cassandra was a hypochondriac. She might’ve signed up for something that turned out to be different than she anticipated. Cassandra could have been involved for the sake of some cure she was seeking.

Things were hush-hush at the Boronsky Clinic, but they’re probably even more secretive at Liechtenstein. It’s a small 61-mile strip of land between Austria and Switzerland, so it’s probably an underground facility. Anna mentioned that by her estimation, they were just outside of Toronto. However, Robert and Jason don’t have a lot to go on. They could end up taking a major detour.

Robert talked to Peter about Liechtenstein just before he began this adventure. If no new clues turn up, Robert could start thinking that’s a good place to start. He has to try something! We should also note that General Hospital fans first met Liesl Obrecht (Kathleen Gati) in a secret Swiss clinic. The doc was working on patients trapped against their will. Experiments were also being done in that case.

Liesl’s currently on the run, so she could turn up at Liechtenstein down the road. Where else is she going to go? What else is she going to do? Perhaps Robert and Jason will stumble across a bonus fugitive for all their trouble. They may not track down Finn and Anna right away, but taking Liesl into custody would bring some unexpected satisfaction.

If there’s a connection between Liechtenstein and the “Fanna” facility, Liesl may be able to cough up some details. Whatever the case, Dr. O could certainly start bargaining for her own freedom. She could at least give Jason and Robert the scoop on the other mysterious patients.