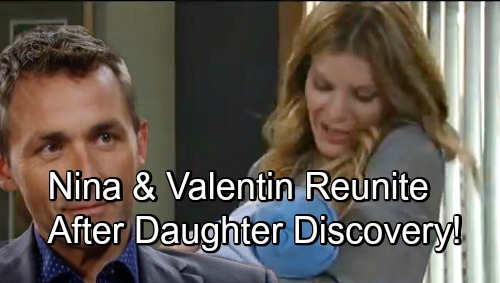 General Hospital (GH) spoilers tease that shocking news will bring Nina (Michelle Stafford) and Valentin Cassadine (James Patrick Stuart) back together. Could that shocking news involve Nina finding out her baby didn’t die after all? That seems like a good possibility since Valentin’s on a mission to reunite Nina and her daughter.

Valentin knows this could be his last chance to win Nina back. He desperately wants to repair their relationship, so giving Nina the child she’s always dreamed of would be a nice start. Of course, Nina will also deal with some pain once the truth comes out. She’ll surely regret that she missed out on her grown daughter’s life so far. That should give Valentin the perfect opportunity to comfort Nina.

Nina’s already in pain thanks to mother’s demise in prison. Madeline Reeves (Donna Mills) is supposedly dead, but that’s up for debate without proof. GH fans know how tricky soaps can be! If Valentin helped Madeline fake her death in exchange for info, she may be alive and well somewhere.

Regardless, Nina believes her mom’s gone forever. Valentin may be able to make some progress by consoling Nina and saying all the right things. Nina obviously had a complicated relationship with Madeline, but this is still a tough crisis. Leaning on Valentin now could make her more open to leaning on him later.

After all, there’s no guarantee Nina’s daughter will be receptive to forming a bond – at least at first. If Nina faces rejection initially, Valentin could be the shoulder she cries on. He could also work to bring Nina and her daughter together. There are plenty of ways for Valentin to be the hero that makes this happen.

Valentin hopes his efforts will somehow put an end to Nina’s anger and disappointment. He regrets handing Peter August (Wes Ramsey) over to Cesar Faison (Anders Hove) as a baby. Valentin’s mostly sorry that he lost Nina over it, but he also feels a hint of guilt about his actions. That’s why Valentin stepped up as a mentor throughout most of Peter’s life.

Nina has softened somewhat, but she needs another nudge in the right direction. This poor woman’s been put through the emotional wringer over the last few months. Nathan West’s (Ryan Paevey) death kicked off some serious sorrow for Nina. Even though Nathan is actually Nina’s cousin, she thought of him as her beloved brother. The loss was almost too much to bear.

Nina also found out Peter was the infamous Heinrik Faison. That brought even more revelations about her husband. The thought of Valentin handing over Nathan’s half-brother to a monster was hard to get past.

Nina has always longed for a kid of her own, so that made this particularly difficult for her. Plus, she had to wonder what might’ve happened if Valentin had spoken up sooner. Maybe Nathan’s death could’ve been prevented somehow, but Nina will never know for sure.

Now Nina’s dealing with complex feelings over Madeline’s passing. At this point, she just needs her luck to turn around. Nina could definitely use some positive updates, so let’s hope Valentin can be the one to provide them. If he gives Nina her daughter back, it seems likely that he’ll be forgiven. General Hospital spoilers hint that this could jumpstart the reunion Valentin’s dreaming of!

Nina and her daughter may face a rocky road, but they deserve to know about each other and figure it all out. Will Nina’s gratitude help her get over Valentin’s mistakes? We’ll keep you posted as other General Hospital details emerge. Stick with the ABC soap and don’t forget to check CDL often for the latest General Hospital spoilers, updates and news.