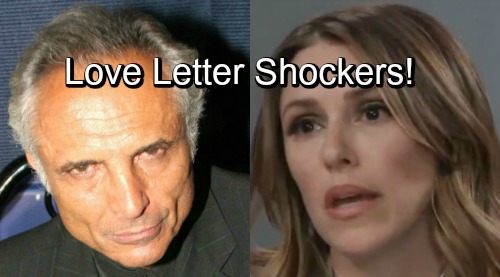 General Hospital (GH) spoilers tease that among the “too much information” parts of Joe Scully’s (Robert Miano) love letters to Jeannette Marino (Ely Pouget) there may be something that shifts the blame for Vincent Marino’s murder away from Sonny Corinthos (Maurice Benard).

Sam McCall (Kelly Monaco) along with Spinelli (Bradford Anderson) “obtained” such a pile of them that they must have covered many years. What would really be interesting is if the pile contained both Joe’s and Jeannette’s letters to each other. General Hospital buzz says it’s possible that it does, since the envelopes were two different sizes.

How Sam “obtained” them of course could cause some future trouble, since there was no warrant and the potential evidence was in fact stolen. Maybe they will mysteriously find their way back into Jeannette’s locked desk drawer after copies are made.

However, since the main plan was to dig up dirt on Margaux Dawson’s (Elizabeth Hendrickson) parents, a batch of love letters between Scully and Jeannette certainly qualifies as dirt and possibly very dirty dirt indeed. One can almost feel sorry for Margaux when she finds out that her whole life has been a lie where her idealized parents are concerned.

Other General Hospital spoilers tease that not only is the man she thought was her father turn out not to be her father, but her dear mother may have put up her real father, Joe Scully, to have him killed! Proof of all of this may be in this batch of letters, and when Margaux realizes they are the real deal, she’ll be thrown for a loop.

Scully may have written something to the effect that he had Vincent “taken care of” for Jeannette, or “got rid of your husband problem” therefore shifting blame away from Sonny (Maurice Benard).

How do you think Margaux react when she learns that her real father isn’t Vincent Marino and/or that her mother’s lover, Joe Scully Sr., ordered Vincent’s murder. Stay tuned to General Hospital and keep checking General Hospital spoilers frequently to see what happens!