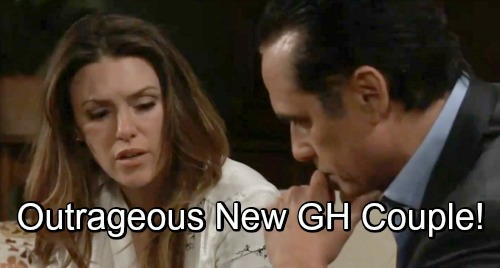 General Hospital (GH) spoilers tease that Sonny Corinthos (Maurice Benard) and Margaux Dawson (Elizabeth Hendrickson) may headed for a hot romance. In a recent interview with Soap Opera Digest, Hendrickson suggested that things are about to get “really juicy and fun” between Margaux and Sonny.

Does that mean a little love in the afternoon’s on the way? Margaux can’t be much older than Sonny’s oldest son, Dante Falconeri (Dominic Zamprogna). Sonny’s latest dream offered some struggles involving the past and self-reflection. Maybe GH will turn this into a full-blown midlife crisis and kick off an affair storyline.

GH viewers can already see an unlikely bond forming. Margaux’s clearly vulnerable thanks to her crumbling family. She doesn’t seem to have friends she can rely on, so Sonny could step up. From there, Margaux could see Sonny’s softer side and start falling hard for the messy Corinthos. Since Sonny’s married and up to his neck in mob drama, it’d be a forbidden romance in more ways than one.

If Margaux indeed hops in bed with Sonny, this could blow up his marriage to Carly (Laura Wright). General Hospital spoilers hint that the initial trouble could start soon enough. Carly could get the wrong idea about Sonny and Margaux’s innocent night together. She might buy Sonny’s excuses at first, but what happens if he keeps spending more and more time with Margaux?

General Hospital spoilers say Sonny and Margaux will keep softening toward each other in the weeks ahead. That could raise flags for Carly. She may sense that Sonny’s trying to do something besides make amends.

Of course, that probably wouldn’t be Sonny’s goal at first. He loves Carly and wants to stay loyal, but he may not be able to resist temptation. Sonny’s attraction to Margaux could catch him by surprise. If General Hospital decides they want to shake things up a bit, they could ditch “CarSon” for a while. Laura Wright might be eager to try out a new pairing – like one with her real-life beau, Wes Ramsey (Peter).

GH could easily throw Peter and Carly together, especially if Maxie were to reject Peter and leave him heartbroken. That’d leave the door open for something more meaningful between Margaux and Sonny. Perhaps a fling could become a full-fledged couple!

General Hospital fans won’t want to miss all the romantic twists and turns ahead. We’ll give you updates as other GH news comes in. Stay tuned to the ABC soap and don’t forget to check CDL often for the latest General Hospital spoilers, updates and news.