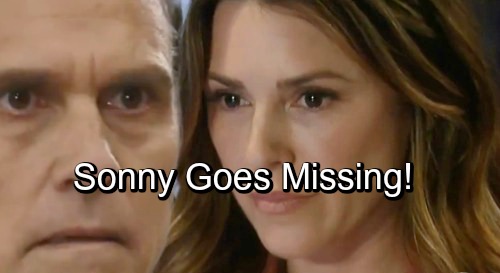 General Hospital (GH) spoilers tease that Sonny (Maurice Benard) could find himself in an incredibly dangerous situation. GH fans know sinister Ryan’s (Jon Lindstrom) on the loose in Port Charles, but he’s not the one to worry about. It’s Margaux (Elizabeth Hendrickson) who poses the biggest threat to the formidable Corinthos.

Sonny’s determined to stand against Margaux, but he’s seemingly been softening toward her lately. During a chat with Jason (Steve Burton) and Sam (Kelly Monaco), Sonny admitted he could understand Margaux’s perspective. Margaux’s mom, Jeanette (Ely Pouget), pushed for Vincent’s murder and Scully ordered the hit, but Sonny pulled the trigger. Murder is murder, so Sonny gets why Margaux’s upset.

Margaux’s rage could grow stronger down the road. GH spoilers say tricky circumstances will force Margaux and Sonny to work together, but that may not be a good thing. Instead of helping Margaux ease up, it could actually provoke her even more.

Once Margaux learns Jeannette wanted Vincent dead, it’ll turn her world upside down. She should be furious with her mom, but she might take some of her anger out on Sonny, too. Margaux may not care if Jeannette goes to prison or not. She might think it would serve her right after what she did.

Of course, Margaux would want Sonny behind bars as well. The new evidence doesn’t really matter in the grand scheme of things. Sonny still killed Vincent, so Margaux may stick with her takedown mission. If she can’t pull it off legally, Margaux may have to do something drastic. Since Sonny doesn’t care about the law, maybe Margaux will decide she doesn’t either.

General Hospital spoilers say Sonny will ask himself “what if” on November 12. He’ll wonder about the road he could’ve taken, so why will he be reflecting? Will Sonny be backed into a corner by Margaux? Over with Carly (Laura Wright), she’ll deal with confusion and possibly total panic. She won’t be able to locate Sonny on the new GH episode, November 13.

Will Margaux be the reason Sonny goes missing? Could she pull a gun on him and take him to an undisclosed location? If Margaux comes unhinged, there’s no predicting how far she’ll go for justice. Margaux may plan to shoot Sonny and make him suffer the same fate as her dead dad.

General Hospital fans won’t want to miss the twists ahead in this storyline. We’ll give you updates as other GH news comes in. Stay tuned to the ABC soap and don’t forget to check CDL often for the latest General Hospital spoilers, updates and news.