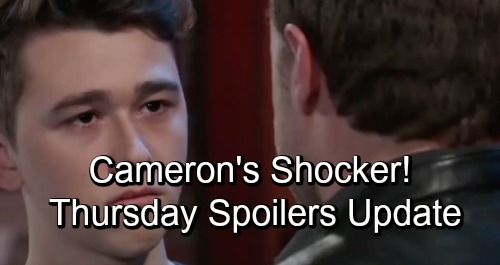 General Hospital (GH) spoilers update for Thursday, November 1, tease that Nina (Michelle Stafford) and Valentin (James Patrick Stuart) will confront their situation. These two are crazy about each other, but Valentin can’t be trusted. That’s a big problem for Nina, who’s been burned time and time again.

Valentin may vow to treat Nina right if she’ll just reunite with him, but how can she be sure? Nina will continue to battle doubts, but love can overcome a lot of obstacles. Nina will keep inching closer to Valentin in the weeks ahead, so maybe they’ll get over a small hurdle on Thursday.

Over with Josslyn (Eden McCoy), she’ll be down in the dumps over her breakup. Josslyn’s plan to win Oscar (Garren Stitt) back will hit more snags, so she’ll need Cameron’s (William Lipton) support to get through Halloween. On the bright side, they’ll be in their Han Solo and Princess Leia costumes. Maybe Cam will suggest hitting a party to get Josslyn’s mind off her troubles.

However, Cameron’s discovery could derail the night. He’ll find something surprising, so this may involve a clue on the pier. Did Ryan (Jon Lindstrom) drop anything that might point to Mary Pat’s (Patricia Bethune) murder? He’s a pretty smooth criminal, so it probably won’t be anything traceable. Still, Cameron could locate a gruesome hint and wonder what went down.

Other General Hospital spoilers say Mac (John J. York) will do some teasing at The Floating Rib. He’ll joke about killing off two old broads, so he may mean Felicia (Kristina Wagner) and Laura (Genie Francis). Mac might have some fun and act like he could be single again along with “Kevin.”

Of course, it’s a bad idea to make murder cracks with a guy like Ryan (Jon Lindstrom). He’ll seem excited by Mac’s comment, so he’ll undoubtedly be cooking up deadly plans. Laura and Felicia will likely survive Ryan’s latest crime spree, but others won’t be as lucky. In fact, Mary Pat’s body should be found and cause quite a stir pretty soon.

At GH, Julian (William deVry) will want to help. He’ll try to make Kim (Tamara Braun) feel better about the Oscar situation, but she’ll reject his advice. Julian may feel like Oscar needs more time to process and chill out, but he can’t afford to lose these precious days. Oscar’s quickly moving toward his inevitable death, so Kim won’t want to stand by and do nothing.

Drew (Billy Miller) will take action on Thursday as well. General Hospital spoilers say he’ll track Oscar down and force him to listen. Drew will understand his son’s frustration, but he’ll think something has to change. He’ll push Oscar to drop the emancipation case and sign up for the experimental treatment. Drew will refuse to let Oscar throw away his last shot at survival.

Unfortunately, it’s not really up to Drew – at least not if Alexis (Nancy Lee Grahn) pulls off a win. Oscar will remind Drew of that and widen the rift. Meanwhile, Laura will tell Alexis to be cautious. It appears Alexis’ watch will instigate this wary conversation. Since Valentin passed this gift along, Laura will think Alexis has to be careful. Cassadine presents tend to come at a steep price!

Carly (Laura Wright) and Ava (Maura West) will also be in the mix on Thursday. As GH fans might expect, they’ll be fighting. General Hospital spoilers say threats will be delivered and insults will be hurled. Since Ava and Carly are well-matched enemies, neither one of them should be very rattled.

Elsewhere, Chase (Josh Swickard) and Michael will rehash all the Nelle (Chloe Lanier) drama. They’ll understand each other’s suffering and connect as they try to move forward. Let’s hope this friendship lasts! We’ll give you updates as other GH news comes in. Stay tuned to the ABC soap and don’t forget to check CDL often for the latest General Hospital spoilers, updates and news.