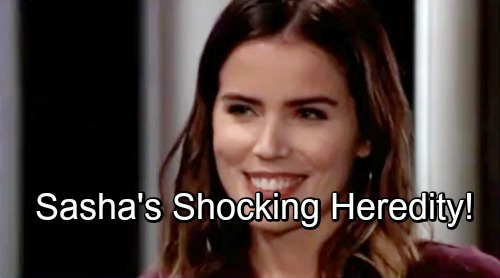 General Hospital (GH) spoilers tease that Sasha Gilmore (Sofia Mattsson) may have some dangerous secrets that could  emerge if given the chance. Genealogists have a joke they often tell about “every family tree having a few nuts and fruits” but Sasha’s family tree has a whole basketful.

Maxie Jones (Kirsten Storms) pointed this out about the Westbourne side in a recent episode of GH where Nina Reeves (Michelle Stafford) was having a lunch date with Sasha. She mentioned Liesl Obrecht (Kathleen Gati), daughter Britt Westbourne (Kelly Thibaud) and their criminal problems, but also mentions baby James (the Marciano twins) as well as her late husband Nathan West (Ryan Paevey).

Maxie then embarrasses Nina a bit when she asks Sasha if she has any mental health issues, and Nina admits to her she had some in the past but they were all centered around the loss of her child, who of course has been found. Sasha says there’s no murder or mayhem in her past. However, there is her CLAY side that she could inherit some pretty serious conditions from.

Long time General Hospital viewers, and especially those who watched the GH spinoff “Port Charles” will recall Stephen Clay aka Caleb Morley (Michael Easton). In Port Charles, Stephen/Caleb was a vampire who was obsessed with Livvie Locke (Kelly Monaco) who he thought was his late fiancé.

When General Hospital introduced the character of Silas Clay (Michael Easton) he came to town looking to care for his nephew Rafe Kovich Jr. (Jimmy Deshler) who was the son of his brother Stephen.

Silas explained that his brother Stephen’s vampire persona Caleb was the result of a mental illness. While he was on Port Charles, Caleb had a kinder, gentler personality named Michael who would emerge at times, which points to him having suffered from dissociative identity disorder.

Stephen also was a serial killer, who killed seven people, was committed to a mental institution in 2003 and escaped in October, 2011. While he was in Port Charles the city he killed several more people, and finally he was killed by John McBain (also Michael Easton!) with a silver-tipped arrow, as a nod to his Port Charles spinoff role. After this (and as a result of the Prospect Park fiasco) writers had to come up with another character than John McBain for Michael, and that’s how Silas Clay was created.

Psychiatrists are divided on whether DID can be genetic, but it’s possible, especially on soaps. Schizophrenia and several other mental disorders seem to run in families, and there have been cases of families who had more than one member suffer from DID.

The Westbourne family seems to have some narcissistic sociopathy running in parts of it, so with Sasha having personality disorders on one side of her family and serious mental illness on the other side, it’s anyone’s bet what might show up in Sasha down the road. Stay tuned to GH and check General Hospital spoilers to see if sweet Sasha becomes something else entirely.