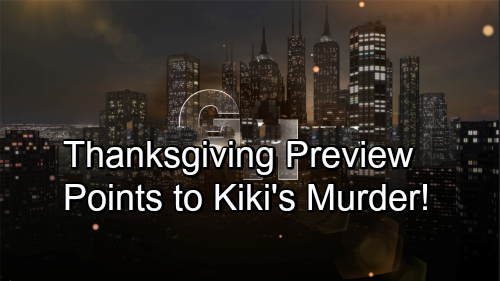 General Hospital (GH) spoilers tease that Thanksgiving is just around the corner, but not all Port Charles residents will feel like celebrating this year. Nevertheless, the holiday’s coming whether they like it or not! It’s never too early to think about Thanksgiving drama, so we’ve got a preview of all the action ahead.

For starters, Monica (Leslie Charleson) will host the annual Quartermaine family gathering. She’ll have a big announcement to make before they chow down. Monica will tell everyone that she’s accepting her fate and embracing their pizza tradition.

However, there’ll be one minor adjustment. Monica will at least want something a little fancier in honor of the Thanksgiving festivities. She’ll make sure they’ve got a spread of gourmet pies, so that’ll make this holiday special. Their pizza-filled feast will be one to remember.

Of course, things should be rather glum for Drew (Billy Miller), Kim (Tamara Braun) and Oscar (Garren Stitt). Whether he eventually relents on the clinical trial or not, Oscar’s situation is certainly dire. He’ll have to wonder if this will be his last Thanksgiving ever.

Michael (Chad Duell) will also feel blue as he considers how big his boy would be by now. He’ll wish Jonah was around to join in the fun, but it turns out he will be! At Carly (Laura Wright) and Sonny’s (Maurice Benard) Thanksgiving bash, Lucas (Ryan Carnes) and Brad (Parry Shen) will make an appearance. Naturally, they’ll bring “Wiley” and allow Michael to spend some time with him.

Michael won’t know it, but he’ll be bonding with his son this Thanksgiving. He already feels a strong connection with the kid, so that’s only going to intensify. Over with Jordan (Briana Nicole Henry) and Curtis (Donnell Turner), they’ll have a lot to be grateful for. If all goes well, this couple should end the evening as husband and wife.

Other General Hospital spoilers say Ava (Maura West) will unleash the beast. She has no idea she’s let such a dangerous man into her life. Thanks to something Ava does on Thanksgiving, Ryan (Jon Lindstrom) will take an even darker turn. Ava will set a sinister act in motion, so Kiki’s (Hayley Erin) murder may not be too far off.

It’s important to note that Thanksgiving will come a bit late in Port Charles. You can check out this exciting new GH episode on Monday, November 26. We’ll give you updates as other GH news comes in. Stay tuned to the ABC soap and don’t forget to check CDL often for the latest General Hospital spoilers, updates and news.