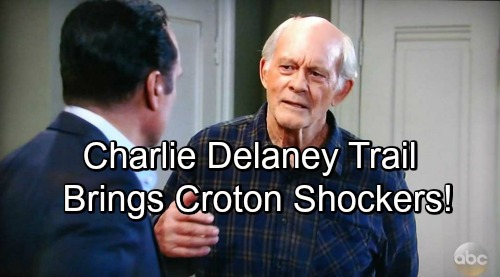 General Hospital (GH) spoilers tease that Mike Corbin (Max Gail) just gave Sonny Corinthos (Maurice Benard) another huge clue. He recognized a picture of Charlie Delaney, the original owner of Charlie’s Pub, so Sonny’s hoping for more info. One way or another, this is undoubtedly connected to the body in Croton.

When Mike first insisted that he knew Charlie, Sonny tried to argue that his dad was mistaken. That led to a bit of a squabble, but Sonny eventually decided to investigate. Now he’s got Max Giambetti (Derk Cheetwood) on the case. Will Max get the scoop and reach some shocking conclusions?

The last time Mike supposedly saw Charlie, Sonny was around 18 years old. Of course, Sonny was also 18 when he started working for Joe Scully (Robert Miano). Soon after, Sonny was ordered to bury the body and that haunts him to this day. He needs to find the potentially incriminating weapon, which Mike moved along with the corpse.

Based on the picture of Charlie, it’s easy to see why Sonny doubted Mike’s claims. Charlie had a handlebar moustache and appeared to be dressed in late 1800s garb. Even if Mike knew him when he was a just a young boy, Charlie must’ve been a very old man!

It’s possible Mike only thought he recognized Charlie. Perhaps he actually knew someone who closely resembled him. Charlie’s Pub is obviously in Port Charles, but Mike and Sonny were likely in the Bensonhurst area back then.

The guy Mike remembers probably helped him dig up the body in Croton and move it somewhere else. That would’ve been at least a two-man job. Unfortunately, General Hospital spoilers say this presents a double dilemma for Sonny. He’s already been worried about Mike spilling secrets to the wrong person. Now Sonny will have to worry about someone else spilling secrets as well.

General Hospital spoilers hint that there’s much more to come in this hot plot. Will Sonny get caught in a jam thanks to all this? Could he land behind bars or will he manage to avoid disaster? We’ll give you updates as other GH news comes in. Stay tuned to the ABC soap and don’t forget to check CDL often for the latest General Hospital spoilers, updates and news.