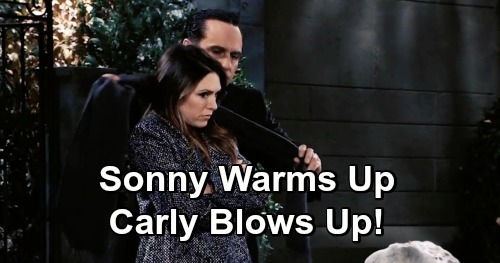 General Hospital (GH) spoilers tease that Sonny (Maurice Benard) may be having a change of heart when it comes to DA Dawson (Elizabeth Hendrickson). After Margaux first burst on the scene and declared her intention to take Sonny and Jason (Steve Burton) down, Sonny decided to treat her as a threat and go after her with all his might.

But since then, things have changed a bit in Sonny’s mind. He watched Margaux’s heart break when she learned that her mother Jeanette (Ely Pouget) cheated on her dad and instigated his murder. Margaux was really torn up over the turn of events, and Sonny couldn’t bring himself to leave her side. He ended up staying with her overnight to make sure she was ok.

And Sonny’s had some friction with Carly (Laura Wright) over Margaux as well. Carly wants Sonny to do whatever he can to bring Margaux down and eliminate her as a threat. Carly would like nothing more than to see Margaux lose her title as DA, and she’d love for Sonny to expose the fact that Margaux hasn’t indicted her mother for murder.

But Sonny has been reluctant to go after Margaux any further. He seems to think that the “Margaux threat” has been contained and doesn’t want to harm her any more. It could be that he’s feeling guilt over killing Margaux’s father and ruining her relationship with her mother, but could there be more to it than that? Could Sonny be harboring some feelings for Margaux?

It sure seems that Sonny feels something for Margaux. They might not be full-fledged romantic feelings, but he could be feeling some protective fatherly feelings for her, since he’s responsible for killing her father. Sonny may be ruthless at times, but he’s also got a big heart when he sees other people suffering, and Margaux is really suffering right now.

One thing’s for sure…if Sonny is feeling something for Margaux, then it’s really going to cause problems in his marriage to Carly. Margaux is responsible for Carly ending up in Ferncliff and suffering horrible abuses there, and Carly won’t forgive her for that. If Carly senses that Sonny has a soft spot for Margaux, then watch out!

Do you think Sonny has feelings for Margaux? Stay tuned to the ABC soap and don’t forget to check CDL often for the latest General Hospital spoilers, updates, and news.