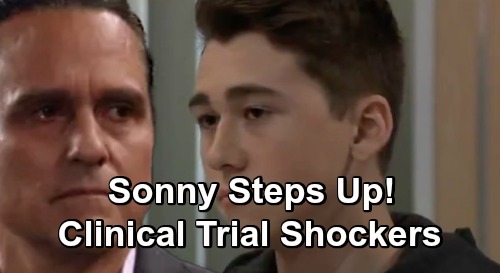 General Hospital (GH) spoilers tease that Oscar’s (Garren Stitt) storyline could come with a few more blows. The kid’s had it rough since he learned he’d been diagnosed with a brain tumor. Of course, Oscar made the situation harder than it had to be. He could’ve saved himself so much heartache if he’d just let Josslyn (Eden McCoy) in on this from the get-go.

Nevertheless, Joss is in the loop now and intends to support Oscar through his crisis. That’s great since Oscar will continue to shut his parents out. They’ve made some progress since Oscar agreed to start the clinical trial, but that doesn’t mean all is forgiven. Since Kim’s (Tamara Braun) been so controlling throughout this mess, Oscar will keep her at a distance.

General Hospital spoilers say Kim won’t get too pushy. She’ll realize Oscar’s dealing with a lot, especially now that he’s receiving his experimental treatment. Kim will allow Oscar room to breathe and come to grips with the new drama. Unfortunately, there’s even more drama to come.

On December 10, GH spoilers state that Drew (Billy Miller) will battle disbelief. That could be a sign that the clinical trial won’t provide the results Oscar and his family hoped for. There’s still plenty of time for things to turn around, but the initial findings may be disappointing.

Regardless, Oscar may take steps to prepare for what’s ahead. He knows this treatment isn’t a guarantee that he’ll survive. General Hospital spoilers say Oscar will have a heartfelt conversation with Sonny (Maurice Benard) on December 13. He may seek some advice from Josslyn’s stepdad, who knows a thing or two about death and the mourning that follows.

Oscar will be concerned about how his demise would affect Josslyn. He knows she still struggles over Morgan’s (Bryan Craig) death, so he won’t want to pile on extra sorrow. Oscar may think it’ll really push Josslyn over the edge if he doesn’t pull through.

Sonny won’t want Oscar’s mind wandering to the worst-case scenario. He’ll urge Oscar to hang in there and fight. However, Sonny may admit that grief becomes more manageable eventually. He’ll always miss Morgan, but he’s learned how to cope and move on. Sonny may point out that Joss has a good support system, so she’ll be fine no matter what.

That could ease Oscar’s worries as he prepares for a potentially grim future. Will Oscar fear the worst and get ready to die? Will he get the miracle he desperately needs later? We’ll give you updates as other GH news comes in. Stay tuned to the ABC soap and don’t forget to check CDL often for the latest General Hospital spoilers, updates and news.