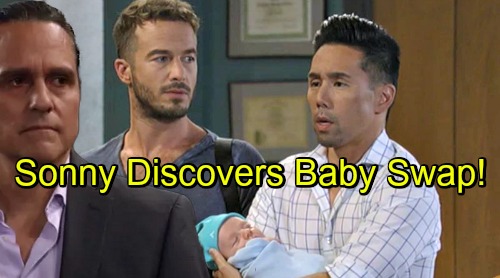 General Hospital (GH) spoilers tease that Julian (William deVry) and Sonny’s (Maurice Benard) battle could take an interesting turn. Since the body and the gun are under Charlie’s Pub, Sonny’s worried about incriminating evidence. He doesn’t want to add to his family’s problems and end up in prison for the rest of his life.

However, Julian poses a serious threat. He’s determined to expand the pub, so Sonny’s delays and hurdles can only take him so far. Sooner or later, General Hospital spoilers say Julian will uncover what Sonny’s hiding. He’ll have major ammunition, so he may be tempted to take Sonny down. Perhaps that’ll lead Sonny to play just as dirty in this fierce GH war.

Let’s say Sonny overhears something he shouldn’t and learns part of the truth about “Wiley.” Keep in mind that Julian doesn’t have the whole story. He knows dead “Wiley” was swapped with another baby on the side of the road, but he’s in the dark on Nelle’s (Chloe Lanier) involvement.

Sonny certainly doesn’t want Lucas (Ryan Carnes) to get hurt either, but that wouldn’t stop him from using this secret to his advantage. If Julian threatens to hand the evidence over to the cops, Sonny could threaten to spill what he knows, too. He might urge Julian not to test him on this. Julian could face legal issues of his own since he was brought in the loop and kept quiet.

In an effort to protect his son, Julian might make a deal with Sonny. They could reach an understanding about their dark secrets and hope they never come to light. It’d be a nice layer of drama since Sonny would inadvertently add to Michael’s (Chad Duell) suffering. He wouldn’t realize it, but he’d be keeping Michael away from his baby boy.

Jason (Steve Burton) could even get in on this. He might agree that Sonny has to do what he has to do. Jason would be in for a huge shock once he found out Brad and Lucas are raising Jonah. How would Carly (Laura Wright) and Michael feel about all this? Carly might try to understand, but Michael’s emotions could get the best of him at first. He may react with outrage.