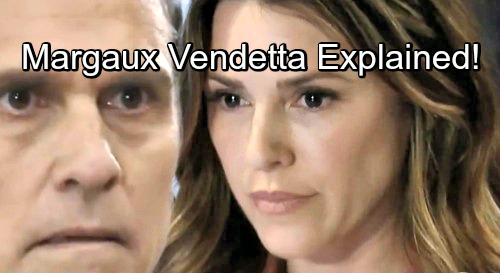 General Hospital (GH) spoilers tease that Margaux’s (Elizabeth Hendrickson) sneaky mission will continue. Ever since she debuted, Margaux’s been obsessed with the Corinthos clan. She had blinders on when it came to Nelle (Chloe Lanier), so she was adamant about taking Carly (Laura Wright) down in court.

Margaux made sure Carly landed at Ferncliff instead of Shadybrook, which caused plenty of problems. Of course, none of that was really about Carly. It was about her link to Sonny (Maurice Benard). Margaux was just eager to cause any pain she could for the infamous mob boss.

Now that Margaux’s got the flash drive, her goal remains the same. She’s hoping to take Sonny down with this GH discovery. We can’t forget that the flash drive contains a memory baseline for both Jason (Steve Burton) and Drew (Billy Miller).

Margaux is sitting on a goldmine of evidence against Sonny. She just has to figure out how she can use it to her advantage and when she should strike.

Sonny will be focused on family matters in the weeks ahead. He’ll deal with the idea of putting Mike (Max Gail) in a facility and work on helping Michael (Chad Duell) cope with his loss. The body and gun under Charlie’s Pub will remain in the back of Sonny’s mind. Margaux’s threat will likely be at the bottom of his problem list.

However, there’s something Sonny doesn’t know. Margaux has an excellent reason for targeting him and it’s not just because she’s the DA. General Hospital spoilers say Margaux settled in Port Charles for revenge. She hates Sonny because of some shocking connection in their past.

Is this about the body that was buried and moved from Croton? Could that have been Margaux’s father or someone else she was related to? That’s a possibility to consider. Regardless, Margaux’s rage runs deep. She won’t stop until she makes Sonny sorry for the sorrow he’s caused.

General Hospital spoilers say Sonny and Carly’s marriage will take some hits. Margaux may be partially to blame. As secrets unravel, “CarSon” will definitely face some stunning blows. Can these two survive the mayhem that’s looming?