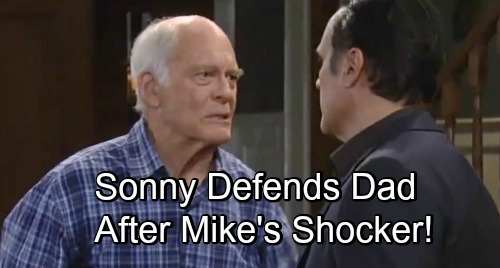 General Hospital (GH) spoilers tease that Sonny (Maurice Benard) will tackle another challenge. He’s received a little break from the action lately, but his problems will inevitably rev up again. The Margaux (Elizabeth Hendrickson) situation seems to be handled for the time being, but there’s another issue that Sonny just can’t eliminate or even put on hold for long.

Of course, we’re talking about Mike’s (Max Gail) Alzheimer’s. He has good days and bad days, so Sonny and his family are never really sure what to expect. Mike has certainly caused his fair share of issues by wandering off, including the time he inadvertently kidnapped Avery (Ava and Grace Scarola).

Thankfully, Sonny and the rest of the Corinthos clan have been keeping a closer eye on Mike lately. Stella (Vernee Watson) has also been a source of steady strength for Mike. His new care center is helping as well. Mike’s in a better place than he was, which means GH is clearly setting up some trouble. You don’t do an Alzheimer’s story without showing the difficult decline.

On December 10, Sonny will rush to his father’s defense. He’ll feel the need to step up and protect Mike, so this may involve some accusations or backlash over some incident. Mike will obviously have a great excuse for whatever trouble he causes. His Alzheimer’s is taking a toll on his brain and he just can’t help it if he gets confused. Sometimes that leads Mike to lash out or make epic blunders.

General Hospital spoilers hint that the show may deliver another big mistake. Mike spends his days at a memory care facility, so could he get into a fight with someone there? Will this happen at home instead? Things tend to get difficult for Alzheimer’s patients after the sun goes down, so Mike may throw some sort of tantrum or create some danger again.

On the other hand, this could be about something a bit less explosive. There’s a good chance Yvonne (Janet Hubert), the woman Mike’s interested in, is actually Marcus’ (Nigel Gibbs) wife. Mike may be making moves on someone who’s married, which might be a reason for Sonny to defend him.

How’s Mike supposed to know if Yvonne doesn’t tell him? She may not even remember her husband every day. Still, Stella tends to have over-the-top reactions. This seems like something she should understand completely, but you never really know how Stella’s going to handle drama.

That’s especially true when her true love’s involved. Stella is still crazy about Marcus, so anything that relates to him is a tender subject. Whatever happens, General Hospital spoilers say Sonny will try to fix Mike’s mess! We’ll give you updates as other GH news comes in. Stay tuned to the ABC soap and don’t forget to check CDL often for the latest General Hospital spoilers, updates and news.